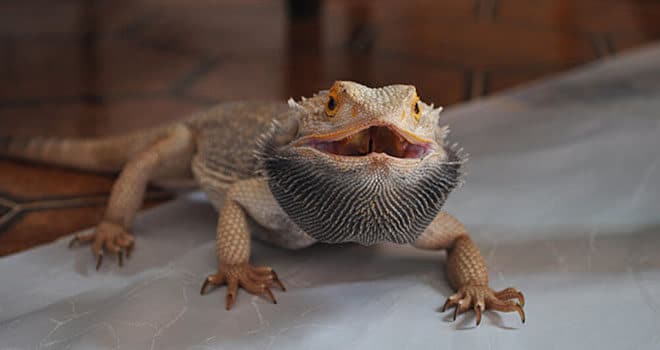 In this post, we are going to explain what it means when your bearded dragon’s beard turns black and some of the different reasons for why it happens. We will explain everything with the help of pictures and videos.

Bearded dragon black beard can be an alarming sight for many bearded dragon owners especially beginners because lets face it… your bearded dragon beard suddenly turning pitch black doesn’t exactly seem like a normal or happy bodily reaction, right? Naturally, your first reaction would be to know exactly why it happens. Keep on reading and I am sure you will find your reason.

How does a Black Bearded Dragon Beard look Like?

A bearded dragon black beard is pretty hard to miss. The scales on your beardie’s neck and chin will turn pitch black that can be noticed even from a distance.

As you can see the beardie in the picture below, his beard is very jet black, his chest has a lot of black splotching on it, and he looks very alert, and very curious about everything.

So, what it means when your bearded dragon’s beard turns black?

Below are the most common reasons for why a bearded dragon has a black beard.

The first reason why your bearded dragon’s beard may turn black is that it’s breeding season and you’ve got a male and they want to breed with a female. That black beard is a kind of a sign of dominance, and it shows that they’re ready to breed.

During the breading time, male bearded dragons often display black beards pretty regularly, especially when in the presence of a female.

Here is a video of a bearded dragon with a black beard and head bobbling during the breeding season.

Bearded dragons both male and female will puff out and blacken their beard when they are scared, threaten, or simply want to be left alone. Just like a cat that might hiss or yowl, a beardie uses its black beard to deter a potential threat.

When in an aggressive mood the black beard might also be accompanied by hissing and a gaping mouth. The below video is a very good demonstration of an aggressive bearded dragon.

A black beard can also be a sign that your bearded dragon is sick. The reason why they might do this is to hide the fact that they are injured or sick and want to look as intimidating as possible. This is a defense tactic that many animals use to scare away predators.

If the temperature is low, make the necessary adjustments to bring it back to normal. Here is our post explaining the heating and lighting requirements for a bearded dragon cage.

Moving bearded dragons to new enclosures is almost always stressful for bearded dragons. Even if you have properly set up the enclosure by installing every needed equipment, a bearded dragon will still need a little time to feel like it’s a safe place.

As they may not consider their new enclosure as their own territory yet, this signals a perceived presence of a threat. Because of this increased anxiety and stress, a bearded dragon might turn his/her beard black.

As a bearded dragon owner, the only thing you can do is to give them some space so they can get comfortable with their cage. Once they get comfortable and feel safe, their black beard should go away if it isn’t due to some other reason.

Bearded dragons should never be housed together. These creatures don’t like sharing space. If you have housed two bearded dragons together we advise you to separate them soon as possible.

Bearded dragons when housed together will fight over territory and might also display black bearding. The fighting can get so intense that you might see bloody limbs to even fatalities.

7. They’re Not Comfortable With You

When you bring home a bearded dragon for the first time, you will want to give it some space and time so he/she can familiarize itself with you and the new environment.

If you have bought or adopted a bearded dragon and it’s giving you a black beard, don’t be surprised because he/she doesn’t know you yet. And it takes time for them to adjust to the new environment and to trust you.

If you rush to interact and try to handle your newly adopted beardie, it’s most likely to turn its beard black. They turn their beard black to give a signal that they are nervous around you and want some space.

Your beardie might suddenly turn its beard black when you have put him/her back in the enclosure after playtime or you have spent a lot of time in their enclosure without any attention.

If your beardie is displaying a black beard and you don’t find any other reason for it then its probably because he/she wants your attention.

Brumation is a naturally occurring process that most of the lizards like bearded dragons go through. During the brumation period, they will slow down, stop eating, and will rest a lot.

When a bearded dragon finishes brumating it’s possible that he/she might turn its bearded black while its system is getting back to normal. This is not very common but possible. So, you need to be aware of this if your beardie has recently brumated.

Other than the most common reasons for a black-bearded dragon beard that are discussed above, there are many other things that also contribute to a black beard.

An incorrectly set up habitat, a poor diet, dirty environment, bad heating, and lighting are all things that have a very negative effect on your beardie’s health. Look at your habitat set up and see if you have missed anything. If you discover that your care plan is not sufficient, make the necessary changes.