Bearded Dragon Shedding: What You Need To Know 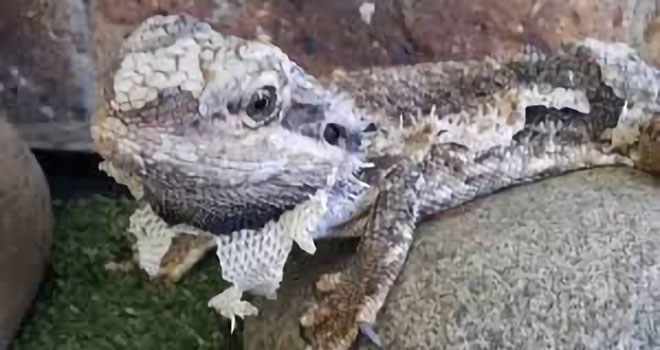 Table of Contents
1 What is Ecdysis?
2 When Does Ecdysis Occur?
3 What Signs Will Beardies Display Before Molting?
3.1 Color
3.2 Eating Habit
3.3 Temperament
3.4 Scratching
3.5 Eating Skin
4 Can You Help Your Bearded Dragon With Shedding?

Ecdysis, most notably known as shedding, molting or peeling, is a trait of most reptiles, and you can bet your bearded dragon will be shedding its skin many times during its lifetime, especially as a juvenile.

Molting and bearded dragon shedding is typically triggered when a new epidermis is replicated beneath the current one. Enzymes will begin releasing when the skin is ready to assist with the detachment.

As humans, our bodies replace thousands of dying skin cells everyday, but the difference between your bearded bestie and us is that they shed whole sections of skin at once. Sometimes they even do a whole body shed. This process will take anywhere between two to three weeks for a whole body molt, and approximately a week for sections.

When Does Ecdysis Occur?

As mentioned above, edysis is most common during a lizard’s younger years because of the way its body grows, but molting is a process that can be kicked off by hormones, changes in environment, diet, breeding, overall health or habitat changes. As a dragon gets older its growth slows, thus, less time spent molting if they’re kept in a place where their climate, UVB, diet, breeding and stress is regulated.

What Signs Will Beardies Display Before Molting?

There are a multitude of signs that a dragon might exhibit before he or she begins molting.

First, their skin may seem a bit more faint or grey-ish than usual. After peeling their skin will appear more vibrant.

Dragons that are in the process of molting may also exhibit decrease in eating patterns. This is totally normal. They may also seem lethargic.

In some cases, some lizards may also seem edgy. They’ll hiss or angle their bodies if you attempt to handle them. Behavior should be back to normal within a few weeks.

You’ll also notice that they’ll rub their bodies on any rough surface and scratch themselves.

Don’t be too concerned if you see your pal munching at its old skin. Their dead epidermis is full of calcium and can be consumed if they’re missing that nutrient in their diet. It also may be related to traits that they gained in the wild to remove their scent.

Can You Help Your Bearded Dragon With Shedding?

The best thing you can do, if your pet isn’t too agitated by being handled, is bathing them, but don’t rub at the skin. You can even keep a shallow water bowl in their cage for soaking, but clean it frequently. Typically, hydration is enough to speed up the molting process. You can also spritz them, but take caution, too much humidity can also cause respiratory issues.

Another good option for shedding skin is adding bark or sandstone to their enclosure for them to rub themselves against. Make sure to regulate your temperature closely at this time.

Please do not attempt to pull or pick at the skin. Let the animal do the work and allow Mother Nature to complete the shedding process. Intervening could mean damaging the new skin.