The makeup of the Green Iguana (Iguana Anatomy) 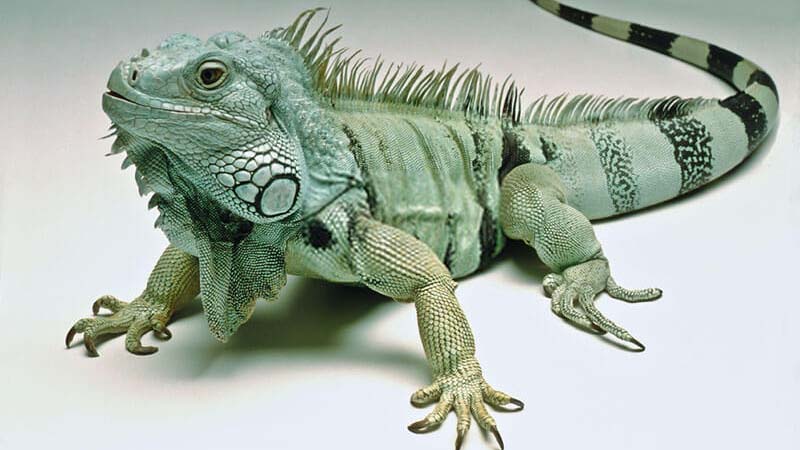 1……Starting at the head, …Iguanas have a wide mouth with very sharp teeths, (as you can see in the picture) the nostrils from which they often snort out unwanted salts (it is this that causes the messy film on the sides of their habitats), iguanas have two ears which look like recessed scales on each side of the head, these are actually external ear drums (Tympanic membranes), and two eyes. But actually Iguanas have what is called a third eye on the top of the head also known as parietal eye, pineal eye, or pineal gland, this is linked to a sensor that does not work like the normal eye but seems to be for detecting movement from above, perhaps as an early warning system against predators which in the wild would mainly be birds of prey.

2…..Moving further down, …We come to the Dewlap, under the chin and the Sub Tympanic Scales under each ear, The Dewlap seems to have two purposes, It is flared out when feeling threatened or showing off, so as to make the Iguana appear bigger, along with this they will usually stand up higher and raise their head up in the air, so as to appear altogether larger, but also because of the blood vessels it contains, it can be flared out when absorbing heat from the sun to help with thermoregulation.

The Sub Tympanic Scales appear only to be decorative, although from a distance to a predator they could look like large eyes and with the dewlap extended can appear to make the Iguana appear much bigger than he really is.

3….. The neck back and tail areas, …The main obvious items to notice along here are the spines or crest, this starts off as the nuchal crest on the neck, which joins on to the dorsal crest along the back, then down to the caudal crest which follows on part way along the tail, These can sometimes become damaged or have the odd one or two missing, and they can also be re-grown to a certain extent, but don’t usually grow back to the full size. They are also usually bigger in a male Iguana, but this is not a guaranteed way to sex an Iguana.

4…..The legs, toes and claws, …The thighs and legs are usually quite muscular, like a very large frogs in appearance, There are rows of glands called the femoral pores that extend along the inside of an Iguanas thighs, these are much more noticeable in a male Iguana as they tend to exude a waxy substance and be more prominent, this is also another indicator in sexing Iguanas. the toes appear to be very delicate, there is a large toe on each rear foot that is multi jointed, and is probably used in the wild to assist in climbing trees. The claws can be extremely sharp (hence the marks on Iguana keepers arms), there is a small very sharp point at the tip of each claw that can, with care, be trimmed back, if in any doubt, get someone experienced to do this….(see page on claw trimming) this then makes handling an Iguana, a much more pleasurable experience !

5…..Smelly bits, …The vent area, this is like a slit in the skin on the underside where the body meets the tail and is not only where defecation takes place but also where the Iguana stores the reproductive organs which in the male are termed hemipenes (Yes this means the male Iguana has not one, but two! reproductive organs).

6…..Bits not covered in the above sections, …Tongue, as with many other reptiles Iguanas do have a forked tongue although only a small fork right at the tip, when you see an Iguana walking and flicking its tongue out, it is in effect smelling, scent molecules are picked up then the tongue retracts and touches an organ in the roof of the mouth called the Jacobson’s organ, which in turn sends the signals to the brain.

Scales, (basically skin cells) which are not as elasticated as in mammals, these have to be shed to let the new ones underneath take over, this is a normal process and also a sign that the Iguana is growing. (snakes shed all in one go, many lizards shed only parts at a time, and mammals shed almost unnoticeably minute particles all the time) Crocs by the way, shed very similar to humans!

Bones, The Iguana as with other reptiles / animals, has a normal skeletal system, but to make good use of calcium they need to also have vitamin D3 which they can make if they have sufficient exposure to sunlight combined with good diet, which in captivity is not always the case. This is why they have to have a good reptile light capable of emitting UVB rays, these mimic sunlight to an extent, also note: reptile tubes can start to deteriorate after a period of 6-12 months and so should be replaced after this period of time. …. There are a few types of indicators that have recently come onto the market, that measure the UVB given out at a set distance, they can not only save money by preventing the throwing away of tubes that still have life in them, but also helps maintain an healthy Iguana.