Why Do Chameleons Puff Up? 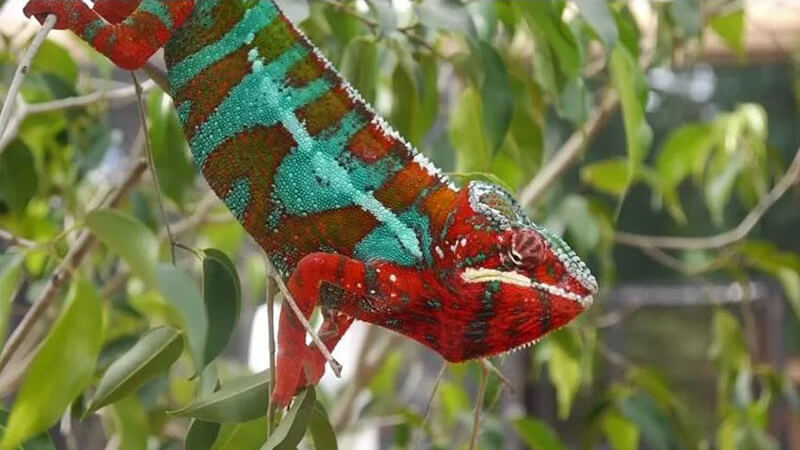 Chameleon as a pet has gained more popularity among children after its adorable appearance in one of Disney’s popular movies, “Tangled.” These creatures are very interesting when you look at their behaviors and activities in particular. They are also known as color-changing creatures.

They are found to have changed their color under different circumstances, such as sensing an intruder walking closer, attracting a mate, and finally regulating body temperature. Furthermore, the creature changes color under stress conditions too. Along with this, the chameleons have a gifted sight, and they are capable of moving them in two different ways at once, giving them panoramic views of the world around them.

The features mentioned above are just a few of the unique traits of this wonderful creature; many others will leave you speechless. One of the unique features that we will discuss in detail is their ability to puff themselves up. Different factors cause this behaviour of puffing up in Chameleons, including feeling threatened from their surroundings, experiencing stress, agitation, and self-protection.

Table of Contents
Why do chameleons puff up?
Stress:
Fear:
Another Chameleon around them:
Skin Shedding:
Possible sickness:
Mating:
Guarding Territory:
What Should I Do When My Pet Chameleon Puffs Up?
Move away:
Don’t hold them:
Check the surroundings:
Leave them alone:
How to prevent the Chameleon from Puffing up?
Cage placement:
Stay below them:
Move slowly:
Minimize Photography:
Minimize Holding:

Why do chameleons puff up?

As mentioned already, certain situations cause the puffing up of a chameleon to repel the stress caused by their surroundings.

This factor is of utmost importance, as the Chameleon gets weak because of stress. The weakness affects the health, which makes this creature prone to sickness and infection with repercussions of a shortened lifespan.

Different sources can cause stress in a chameleon, which can be mentioned as their perception of the world when we sum up. Each Chameleon will have its sense of security, yet the most generalized factors may include interaction with living things around them and their cage placement.

Being a shy creature and mostly prey, Chameleons have a very strong obsession with their territory to feel safe and protected. As soon as any strange living creature tries entering their territory or even passes by, the Chameleon will puff up in an attempt to scare the intruder, which is a result of the stress experienced by it.

The feeling of danger or threat from their environment causes puffing up of a Chameleon. The feeling of danger might kick in because of them being prey, where the fear of being hunt down by a predator. As soon as they feel threatened, they puff up to look more intimidating and to scare the predator or any other creature away.

They puff out to look bigger, and because of the bright colors in their body, they can show a warning sign to the attackers or intruders to stay away.

Another Chameleon around them:

As Chameleons love to have a solitary life, seeing even their own reflection might intimidate them, making them exceptionally territorial. So, when a male Chameleon tries to enter their territory, that’s when you can get a spectacular sight of the cold war and a lot of puffing up, which may end up in physical aggression. Two Chameleons in one place means one has to become dominant to keep the bush.

Both the Chameleons puff up to look bigger and more intimidating with additional gestures of hissing and curling and uncurling of their tails. The fight continues until one of the two gives up by puffing down and darkening its color. In case this doesn’t happen, there is an intense fight which can result in biting and head butting between the two.

As they approach adulthood, the chameleons shed their skin on a regular schedule. The process takes place in bits and pieces, with a time span ranging from four to five months. The skin shedding process causes the Chameleons to puff up; puffing up helps them crack the old dry skin, which eventually breaks down their old skin completely.

The sickness could be anything, including broken bones, viral infections, or strained joints. To keep track of their physical sickness, you might want to check their puffing-up routine.

A Chameleon puffs up when they encounter a female as part of a mating display. It puffs up when trying to charm a female around, to see the female’s receptiveness. In addition to this, the Chameleon might show the gestures of swaying, hissing, and change of colors to impress the female for mating.

Being a very territorial reptile, a Chameleon can be overly protective of its territory. Any intrusion within its region offends him gravely, which results in puffing up of its throat. In case any living creature tries entering their bush or intrudes in their surroundings, as a result of the defensive mechanism, they tend to puff up.

What Should I Do When My Pet Chameleon Puffs Up?

The puffing up of a Chameleon is normal behavior, and it shouldn’t worry you. It’s a gesture to show that your Chameleon is perfectly healthy and alright. However, as mentioned in the reasons above, it might be a result of fear, stress, physical sickness, or a possible sign of breeding of your Chameleon. Hence it is important to keep track of this signal to avoid stressing your Chameleon, which can be harmful to this living being. Some suggestion that will be helpful for you if your Chameleon has been puffing up is given below:

If your Chameleon shows signs of puffing up as you approach, it might be because they feel intimidated by your presence. In that case, it is suggested to move away from the cage slowly and gradually.

If the Chameleon is puffed, it is a sign that they are scared and ready to guard themselves and their territory. In this situation, the Chameleon can be aggressive and can bite you if you’re trying to hold it in this condition.

Chameleons puff up if they notice someone in their surroundings, which might cause fear and stress in them. So, if the Chameleon has puffed up, you must check the surroundings to find if there’s any bird or any other living thing around them, causing the stress. Try removing the source of their fear to avoid the inconvenience.

When you see the Chameleon puffing up, it is a sign for you to leave them alone. While puffing up, the Chameleon must be left alone, whatever the reason may be. Even if you want to help them, it’s best to keep your distance from them and let them be.

How to prevent the Chameleon from Puffing up?

Puffing up a Chameleon is a completely normal activity. However, the puffing up of this creature might be a sign of stress or sickness. For these reasons, you might want to prevent your Chameleon from extra stress, as it is unhealthy for the animal.

You often need to get closer to the cage of a Chameleon for maintenance purposes, which may be offensive for the Chameleon and, as a consequence, the shy little creature puff up. In that case, it is suggested to slow down your movements around the cage.

As Chameleon is a very shy creature who prefers solitary confinement, it is shy to photography too. If you’re trying to take a picture of your Chameleon, make sure that you keep a safe distance, preventing your pet from puffing up.

You must not try picking up or holding your Chameleon if it doesn’t like these gestures. However, if you want to do so, make sure that the handling is reduced or minimized to the least, which means once in a blue moon.

Chameleons’ overprotective and shy nature makes them prone to any type of intruders in their territory. Hence, making them exhibit the trait of puffing up their bodies. This gesture of puffing up makes them appear larger than their original size and fierce when they feel threatened.

Moreover, the puffing up of Chameleon could be a sign of sickness, skin shedding phase, or fear of being attacked. Being territorial, they need to be alone on their bush as one dominant creature; the presence of any other Chameleon intimidates the causing the puffiness.

In the end, the one point that could be taken as the conclusion of the above article is stress: which is the main reason why Chameleons puff up. All the mentioned circumstances are what lead to stress and hence the puffing up of Chameleons.