How Much Water Do Chameleons Drink? 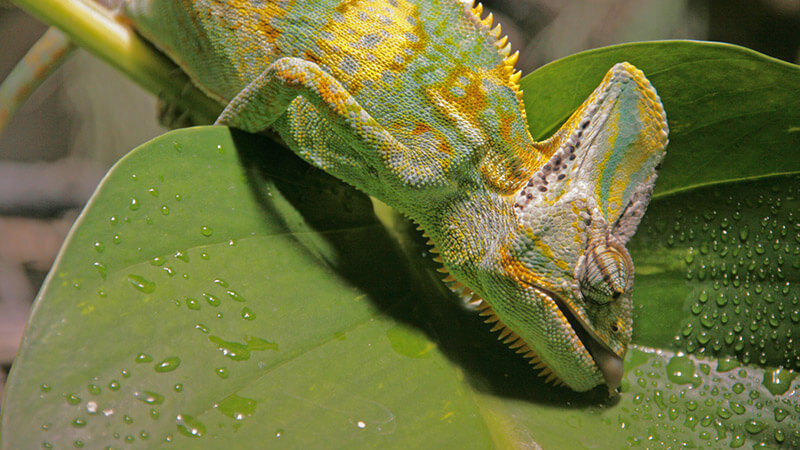 Chameleons are bizarrely shaped and colored lizards from the world of reptiles. These unique creatures can change their color and have a pair of striking eyes, which can look in two different directions at once and contain a long sticking tongue. They are extremely territorial and overprotective about their bush.

Like every other living thing, Chameleons also need to keep themselves hydrated. Being a resident of warm habitats such as deserts, their water consumption is very seamless and often more than mammals like us.

Chameleon’s first chance to drink or consume water starts with the dewdrops, which are formed in the dark early morning hours out of the heavy mist. This mist due to high humidity also helps in reducing dehydration through breathing. The hydration or water is absorbed by the Chameleons through breathing in a certain amount. They also drink water in the form of drops to stay adequately hydrated.

Water requirement of a Chameleon

A Chameleon might require water at least once or twice a day, depending on the climate they are residing in. Furthermore, different species seem to drink different amounts of water than others, depending on the amount of rainfall. They drink water by licking morning dews formed after late-night mist or rainfall.

A Chameleon sense of drinking water doesn’t kick in until the rain falls; it is very rare for a Chameleon to drink directly from a still water body. Chameleon can detect water either if it is moving or in the form of morning dew. Providing water in an unnatural habitat can be challenging and requires good water spraying within their cages to provide them enough water to drink.

A wild Chameleon would be able to get as much water as it requires, but in captivity, the owner needs to ensure the correct amount of water is provided, which is needed to keep the Chameleon hydrated.

How to provide water to Chameleon

As mentioned above, Chameleons can detect water only if it is moving or in the form of drops. So it is important to provide a dripping water system that can spray water twice a day to run off the leaves or branches.

This technique requires persistence, attention, and time. In this technique, water is sprayed using a hand spray bottle; it’s recommended to spray at least twice a day. However, this process might not be practical for many if there are more than one cages to cater to.

Just as the morning mist, the misting systems, whatever it may be, produce a fine misty spray in the cage, where the mist can stick to the leaves in the form of droplets. The Chameleons drink the water in for of mist or droplets. An automatic misting machine will make this task easier for you by providing a mist in the afternoon and during the night as well, which may leave a morning dew effect on the leaves for the Chameleons to drink.

It also ensures that the water is available as per the requirements of Chameleons. The misting machine sprays water from the downside in pressure, which might make your Chameleon run away, so the cage must be positioned in a way that the Chameleon is away from the high pressure of the misting system.

It’s important to watch the Humidity for Chameleon, as they come from tropical rainforest, the weather must be adjusted as such. A good hygrometer will help you keep track of a Chameleon’s humidity requirements. Generally, the humidity for a captive or pet Chameleon must be somewhere between 50-75%.

One of the simplest techniques to keep the Chameleon hydrated is using a simple gravity feed dripper; this can be done simply by making holes in a plastic cup and managing the water dripping rate. A more sophisticated choice would be to buy a reptile dripper with a water tank and simply tune for to control the drip-rate.

A positive aspect of using a dripper is that it doesn’t use a pressure spraying like a misting system but provides water constantly such that Chameleons can find it on the leaves whenever they are thirsty. The excess water of the drippers could be collected by using a drainage collection tray.

This method is similar to the drippers, where instead of the cup with holes, ice cubes are placed on top of the cage for melting in the form of drops. Using Icecubes might not be a very effective option, as it doesn’t send water droplets consistently inside the cage for the Chameleon to drink. The water provided through this technique comes in the form of small splashes.

Foggers are very effective tools for creating a nice misty environment for the Chameleons inside the cage. As the Chameleons need to drink dew drops from the leaves in the morning, it is best to leave the foggers on few hours before dawn. The temperature at that time is quite cool, which will prevent the drops from evaporating, and the Chameleons can drink water as an imitation of the natural cycle.

Things to Avoid when Providing Water to the Chameleons?

A healthy, hydrated Chameleon would never want the water to be showered on them directly. Placing a shower right on top of the cage so that it hits the wall and then falls on the Chameleon must be avoided in normal circumstances. Water should be provided in this manner only if the Chameleon is extremely dehydrated.

As mentioned above in the article, the Chameleons sense only moving water bodies, and are not biologically formed to be in water bodies, and do not like bathing. They like to live on trees and rarely set their feet on the ground. This method will only stress out your Chameleon instead of hydrating it.

Is the Chameleon drinking enough water?

A simple sign could be checking your Chameleons Urates, which is, in fact, the liquid excretion of their bodies. If the Urates of a Chameleon are white, it goes to show that the shy little reptile is perfectly hydrated. However, a yellow urate indicates that your Chameleon isn’t getting enough water and that you must increase the frequency of providing water in the cage.

Another sign of dehydration is plump-looking skin and wrinkles in the Chameleon’s eyes, which indicates that the water provided to the Chameleon is below the level of its requirement.

If your Chameleon is showing signs of dehydration, you must seek help from a vet, as dehydration can cause irreversible damage to the internal organs of the Chameleon. If your reptile didn’t drink enough water just a day before, you must wait, as the reptile might be from an area where there is no rainfall on an everyday basis.

However, showering the Chameleon could be an option in case of dehydration. Ensure that you check the temperature and force of water beforehand, as this process might be stressful for the Chameleon.

Many hydration tests have proven that multiple misting throughout the day are very effective. However, the natural hydration method works best to replicate the cycles found in nature. The Chameleon loses water at night due to breathing, which can be adjusted by raising the humidity level in the surrounding. This mist, produced with the rising humidity level, forms the drops of water on the leaves, which can help the Chameleon drink later.

The whole discussion concludes that Chameleons’ drinking routines and ways are as unique as they are. A Chameleon will never drink directly from the pot of a bowl full of water, and if it is doing so, you should be worried. A normal Chameleon drinking routine can be settled from 2-3 times a day to multiple times a day, depending on the type of Chameleon you’re handling.