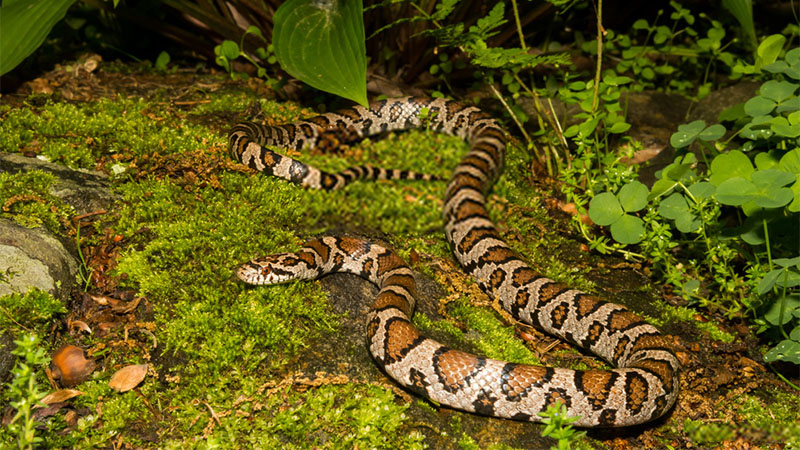 In this post I am going to show you my version of how to care for milk snakes. There are in my opinion multiple successful ways to raise a snake or any animal for that matter. This is just my way; other people might do it differently but as long as the snakes have all their needs met then it’s a good way.

Milk snake’s Latin name is lampropeltis Triangulum and they’re actually a species of king snake. There are a few different subspecies of milk snake that are very commonly kept in captivity including the Honduran, pueblan, Sinaloan, Mexican and Nelsons.

The name milk snake actually comes from a myth that milk snakes would sneak into farmers barns at night and latch on to the cows udders and drink their milk. But obviously this has never been confirmed.

Their size generally ranges from two to six feet with the Honduran milk snake growing slightly larger than the other subspecies.

They can live anywhere from 12 to 20 years in captivity so this is a big commitment with a long-life span.

Milk snakes come in a wide variety of colors and the reason they are banded the way they are is because they actually use mimicry to avoid predation. They closely mimic the coral snake a highly venomous species of a lapid.

They are ectothermic meaning that they have to get their heat from the sun in the wild. and they are poikilothermic which means that their body temperature will fluctuate with the environments. For snakes this usually means moving to a warm spot to bask and then moving back somewhere cool to cool down.

One of my first pieces of personal advice is for new snake owners. When you bring in your snake for the first time to your house, you should put it in its enclosure immediately and leave it alone. I know it sounds like the most difficult thing in the world especially when it’s your first snake because you just want to hold it so bad. But it has to be left alone for at least five to seven days. After at least 7 days’ time you can offer it a meal. Once it’s settled in a little bit more and you know it’s comfortable enough to take food then you can start the handling process.

Sometimes you get a snake who just won’t eat. That’s pretty common especially with babies. There are a few things that you should try before you freak out. The first thing you should do if you have a snake that’s not eating is you should check your husbandry. Check the temperature, make sure you have enough hides in your enclosure, check the humidity level. If all that is right and they’re still not eating you should wait another seven days after you tried to feed them. Offer them a mouse but just put it in their enclosure, cover the enclosure completely so that there’s no light shining through and leave it alone for 24 hours. Nine times out of ten when I’ve had a milk snake that doesn’t eat that is what fixed the problem. They’re just feeling a little insecure and they need that added bit of security.

Baby milk snakes usually do just fine in a 6 quart tub. I like to hold my snakes in plastic tubs because they’re way less heavy than glass, they hold humidity better and they’re more secure than the mesh lids that you get on a glass terrarium.

If you would like to use glass babies can be held in a 5-gallon to 10 gallon terrarium and then adults usually do fine in a 32 quart tub or a 10 to 20 gallon glass terrarium.

If you do choose to use glass make sure that you have several locks on the screen because milk snakes are masters at escaping, do not underestimate their abilities.

As for substrate they do tend to burrow, you can use Aspen sand chips which I really like because it’s so easy for them to burrow in the Sandy chips. You can also use Aspen shavings or reptile prime would be good for them as well. I would stay away from cedar and untreated pine.

Milk Snakes should have at least two hides in their enclosure. One hide on the warm side and one on the cool side. You can also add Decor but just as long as everything has been sanitized.

Milk snakes should have fresh water added daily and I recommend taking the water bowl out about once a week to clean it and disinfect it.

As I said milk snakes are ectothermic which means they need to have a way to thermoregulate. So, there needs to be a warm end and a cool end of the enclosure. The warm end needs to be mid to upper 80s and the cool end should be about 78 to 80 degrees. There are a few ways you can use to heat the snake’s enclosure. You can use a heat lamp that usually works best for glass or terrariums. I don’t personally use a heat lamp I find that I like belly heat much more it’s much more convenient for me but if that’s what you want to use you can go ahead and use that. If you’re going to use a heat lamp make sure that they still have a diurnal cycle meaning the heat lamp is turned off for 12 hours a day.

A lot of people will also use heat mats that you get from the pet store like the zomed heat mat. With the heat mat you will need to use a thermostat. If you only have one snake and you’re using a heating mat you can get the JumpStart thermostat which is really good and very simple to setup.

For humidity milk snakes are generally fine with the ambient humidity that you have just in your house. If it’s especially dry you may want to give the substrate a mist about once a week or if they’re going into shed you may want to miss more often or even provide them with a shed box.

I’m a believer that snakes merely tolerate being handled and if you don’t like my opinion that’s totally fine. But I recommend handling once a week and not really much more than that and not really more for an hour at a time. That’ll be enough to keep them docile keep them used to being handled but it won’t be too much to stress them out.