Lumps and Bumps on Iguana: When You Should Worry? 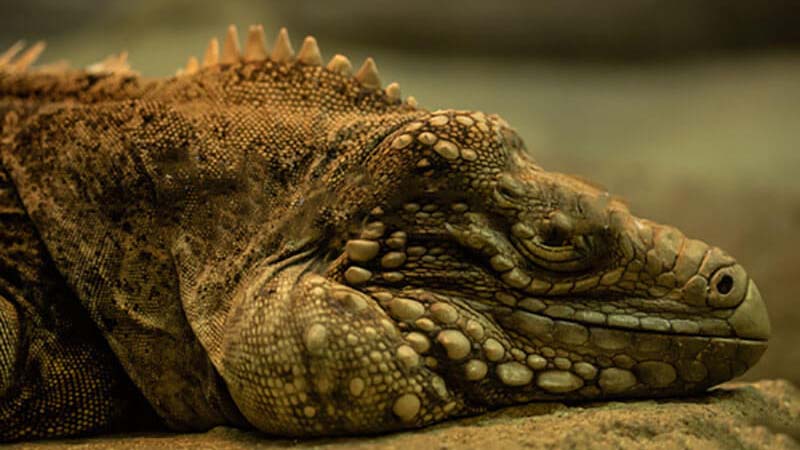 But a lump or bump that appears anywhere on an iguana must be carefully inspected and usually requires a trip to the vet for further treatment. Abscesses, cysts, ulcerated skin, blisters, and crusty dermatitis all have one thing in common. The cause is usually based on improper husbandry.

Infections seen in iguanas frequently are attributed to damp, dirty, and underheated environments coupled with poor nutrition. An iguana that has to live in an inadequate enclosure and is not fed a proper diet is destined to get sick.

Living in a substandard environment causes stress, weakens the immune system, and can result in infection from pathogens, bacteria, and fungus. Read more on standard & quality living environments for iguanas.

Dermatitis and pyoderma in iguanas can manifest as liquid-filled blisters, crusty areas, ulceration of the skin, or dark, discolored patches of skin. Dermatitis can be incorrectly diagnosed as a burn when the problem is actually much more serious.

If you have your heating elements properly placed and your vet suggests the cause is a burn, request a bacterial culture of the problem area to rule out dermatitis.

If you notice a dark, crusty area on the face, legs, or body of your iguana, first inspect the enclosure’s heating and lights. Are the heating elements far enough away from your ig? Has something been dislodged and is in a lower or closer position? Iguanas are active animals and a heat or light fixture may be moved by a climbing animal or lashing tail.

Always check your appliances regularly for a change in position, especially if you use clamp-on fixtures. Double check distance of a basking light by placing a strip thermometer below it to check the maximum temperature. If it goes over 100 degrees, you need to raise the fixture to prevent burns.

Blisters that appear on an iguana are often caused by burns. This includes dark patches on the nose. Always cover any light or heat bulb with screening to prevent your iguana pressing his or her nose on the hot bulb. Iguanas are very curious about light bulbs. It is a common way that iguanas get nostril burns. Obviously, never use a hot rock!

So how does the vet determine that a blister or abscess is not just a burn or abrasion? By doing a bacterial culture of the infected area. Fluid from blisters and cultures from the lining of an abscess can be submitted for bacterial culture and cytology.

Treatment usually consists of injecting the iguana with antibiotics specific to that bacteria or pathogen in combination with topical antibiotic cream and a correction of any husbandry problems.

The characteristics of an abscess are:

If the abscess has burst and is weeping thick material, clear fluid, or blood, you must get the iguana to the veterinarian immediately. Reptile pus from an abscess is generally cheesy, thick, granulated, and white, green, or yellow in color. Be very careful to wash the area well with warm water and Betadine solution and cover with clean gauze.

Wash your hands well as the material from an abscess is highly infectious and can be zoonotic or transferred to humans. An infection from an abscess, even if drained after bursting, will reoccur if not correctly treated.

An abscess must be removed completely or lanced, the caseous material removed, flushed, and packed with antibiotic ointment. A bacterial culture is taken from the lining of the abscess (not from the material removed). Always ask the vet about the site of the cultured material to be studied as culturing the contents of an abscess may not reveal the true nature of the infection.

Reoccurring abscesses can also indicate the presence of a primary, systemic infection in the body cavity. An infection in the colon, hind gut, or coelomic cavity can reveal itself by the repeated appearance of abscesses in the extremities. An infection this advanced will take a concentrated effort on the part of the veterinarian to control.

An infection that is not treated or mistreated and allowed to extend into deeper tissue or internal organs can cause the loss of extremities, tail, eyes, ears, and even loss of life. An infection is not a problem that can be ignored and must be treated early and aggressively.

Another cause for the appearance of a bump can be from parasites such as mites that have burrowed under the scales. Watch for dark spots or small bumps on your iguana’s body or tail. If you suspect mites, look carefully in your enclosure for the small bugs.

Lift stones or branches and watch carefully for movement. Place a lightly folded white sheet of paper in the enclosure and check it first thing in the morning. You might find red or black mites in the crease.

If you do discover mites in the enclosure or on your iguana, you must clean the entire enclosure with bleach and hot soapy water. Discard any porous objects that cannot be washed. Soak your iguana in a tepid bath with the addition of a tablespoon of Listerine and Betadine.

Soak your iguana for at least ten minutes but keep the water away from the head. Repeat this procedure every few days for a couple of weeks.

Infections and abscesses in the mouth area are often referred to, even by misinformed vets, as “mouth rot” also known as infectious stomatitis which is often seen in snakes. “Mouth rot” is very uncommon in iguanas or any species of lizard for that matter.

For instance, some iguanas have a dark area at the tip of the tongue which can be misdiagnosed as “mouth rot” or the symptoms of metabolic bone disease like a misshapen or swollen tongue may be incorrectly called “mouth rot”.

If you have a concern about inflamed tissue in your iguana’s mouth, do not let the guy at the pet store sell you something for mouth rot in snakes. Take your iguana to the vet for a proper diagnosis. Hematology or blood work, pharyngeal or throat cultures, and lung washing for cytology are the proper tools used in diagnosing stomatitis.

Trying to medicate or treat disease at home often leads to a more serious problem or a permanent disability. It is cheaper to get to the problem early and save your iguana the increased pain and stress from the complications of a mistreated or untreated disease.

If your iguana develops an abscess, you must review your enclosure and your husbandry techniques. Look for sharp edges or wires that could cut your iguana. Bacteria enters through scratches in the skin.

Separate two iguanas if they fight. Make sure your enclosure is clean, dry, and free from dirty water or old food. More on iguana diseases & disorders.