The Proper Way to Handle Your Pet Iguana 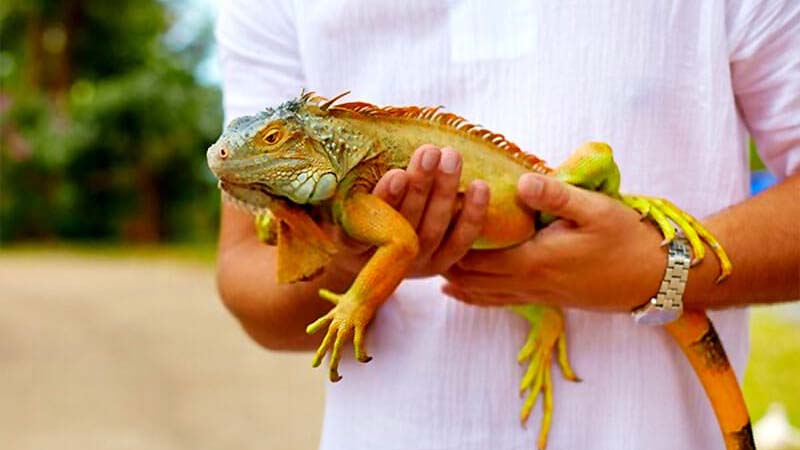 Iguanas are by nature wild animals, and as pet owners we should understand we are forcing them into domestication by possessing them. We should therefore also be more understanding of how they react to us in captivity. An iguana’s instinct is to run and hide when approached. Proper iguana handling is a process that will take time and commitment on your part.

It is best to start early getting your iguana used to you and the possibility of being handled. Many iguana owners discover that as their pet gets older, he may restrict who he allows to handle him. If your child or spouse is not involved in the early handling process of the animal, he most likely will not allow them to handle him. Much of this depends on the iguana’s personality.

Your iguana also has to know who is in charge. If you do not have the confidence needed to handle your iguana, he will most likely sense this and use it to his advantage.

There are some basics to remember when learning the proper way to handle your pet iguana. Do not suddenly grab him. Do not grab him by the tail or the legs. Do not swoop down from overhead and try to grab him either. Remember, he has an “eye” on the top of his head, literally, that detects overhead motion. He will react with fear and/or aggression, most likely.

When your iguana is young, first he needs to get used to you. This will take time. In the beginning, he may flee or hide when you come into the room. Do not be alarmed or upset. Just go about your routine, feeding him and cleaning his cage.

Once he is accustomed to you, start offering him treats or food by hand. Spend time with him. Offer him your hand, and let him crawl into it. Pet him gently on the back of the head and on his sides. Do this every day, or as often as possible. Initial handling may be stressful for your iguana, so start out with short sessions, increasing them as he adapts.

Over time, you will know if you have an iguana with a personality that will allow more extensive handling. When you do handle him, you should hold him from his underside, or chest, with one arm and support his tail and hind legs with the other. You need to handle him firmly, but gently enough not to squeeze or hurt him. He needs to feel secure that you are not going to drop him.

The term “cradling” seems to be a way to best describe the handling position, cradling from the underside. His back side would extend back toward your elbow, with his tail under your arm so to speak. His back legs would extend or hang down on either side of your arm pointing downward, and his chest would rest on your forearm. Your hand would be positioned just behind his front legs, supporting his neck and head.

The holding position may require some adjustments based on the size of your iguana. The above is just a basic guideline for one way of iguana handling. A smaller iguana may be easily positioned in your hand, with your forefinger extending underneath his chin.

Start early in your iguana relationship getting your pet used to you and the idea of touching and handling. Be patient, move slowly, don’t scare your iguana by grabbing him or with sudden movements. As time passes, you and your pet will continue to get used to each other and you’ll be an iguana handling expert.