All You Need to Know About the Red Iguana 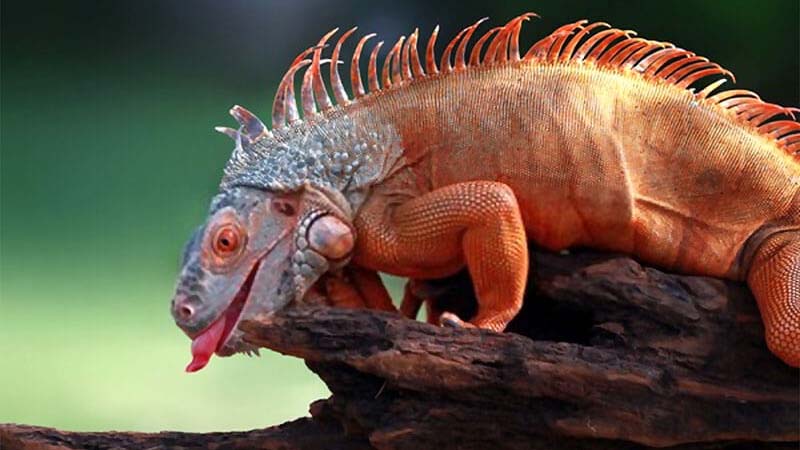 Even though the green iguana is the most popular pet, more and more people are starting to take an interest in the red iguana. The main reason for the attention focused on the red iguana is its unique color. People have only been breeding the red iguana for a short time and not many have reached an age beyond two to three years.

Red iguanas are also pricey, with a baby costing on average three times more than a green iguana. You are not going to find even a young one under $60 and $200 is not uncommon.

If a red iguana is going to be your first pet iguana, you need to gather as much information as possible before bringing the little one home. Much misinformation is floating around on the internet about iguanas in general and the red iguana in particular.

For instance, many times you will see a Red-sided Skink referred to as a red iguana. The Red-sided Skink is a very fine looking red reptile but not an iguana. For one thing, all iguanas are in the family Iguanidae while skinks are in the Scincidae family.

The Scincidae family is the largest lizard family with over seven hundred different species. The Red-sided Skink is brown with red stripes running down its sides. They are very smooth and fast and like to dig and make burrows. An adult is only approximately eight inches long. Skinks have a much wider range than iguanas–they are on every continent except Antarctica. Skinks are meat-eaters and do humans are big service by helping to control insect populations.

Iguanid Lizards are what you usually picture when you hear the word lizard. While they come in many sizes, the most common adult length is 4-6 ½ feet. Half of their length is tail, with which they slap predators, including humans. Iguanid Lizards are herbivores and eat vegetables and fruit, especially dark, leafy greens. Both the green iguana and the red iguana are in the Iguanid Lizard family. Other members of this family include fence lizards, anoles, chuckwallas, and horned lizards.

The last thing you want to do is believe you are getting a red iguana and end up with a red skink, whose adult size is roughly the size of an iguana at birth. A red iguana is going to require larger housing every year, unless you start out with an enclosure that’s ten feet long and eight feet high, a little too large for a baby iguana.

They need a good variety of fresh vegetables and fruit every day, along with clean drinking water. Animal protein can, in fact, make a red iguana very sick or cause it to die young.

A red iguana needs to be handled every day so that it gets comfortable with you and its new environment. Some iguanas can be aggressive, although it’s most likely with a male of breeding age. All iguanas require proper temperature controls and lighting. That means a hot basking area (95 degrees) and a cooler living area (80-90 degrees).

A red iguana is a beautiful creature and would make a great addition to the family of any iguana lover. If you have questions about this red member of the iguana family, the best place to find the answers is by asking questions on iguana forums. There, fellow iguana owners will help you out and you won’t make mistakes because of misinformation.