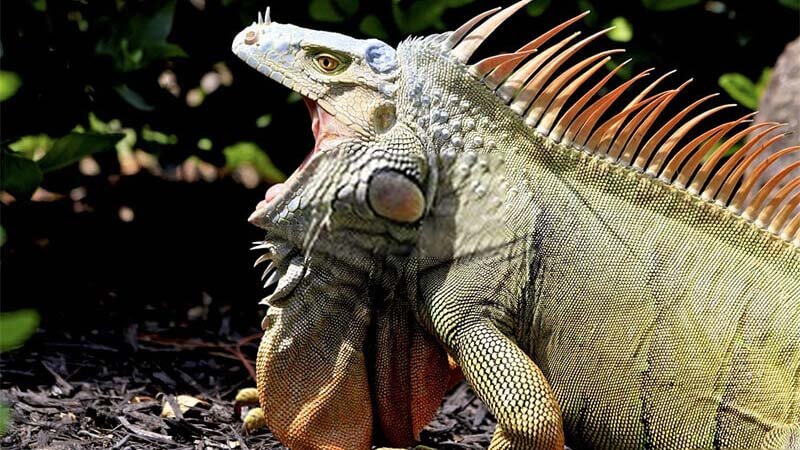 It’s a question that seems to continually appears on forums, usually from new iguana owners or someone who is thinking of obtaining an Iguana.

So just to confirm the fact, yes they do indeed have a set of very sharp teeth as can be seen below.

These teeth are situated on the inner sides of the jawbones which may be why they are more difficult to see especially in smaller Iguanas (also they have a transparency to them) but Adams picture above has captured them brilliantly.

Some people have said that their Iguana has tried to bite them but didn’t close its mouth down fully or was only playing with them and they never felt anything sharp and didn’t receive any flesh wound……then they should consider themselves lucky on this occasion! but maybe not so on the next!

Never underestimate the damage a fully grown Iguana can inflict when in a breeding season fixation! even smaller young Iguanas can inflict a nasty flesh wound but large males can tear flesh with the result being a need for stitches or even surgery!

The picture below clearly illustrates one such injury, in this case the owner admits it was her own momentarily lack of concentration, when reaching to get the Iguana out of the tub and catching him on the nose in the process, which led to this injury, and also by her own words this bite was inflicted by a normally gentle, tame, intelligent pet iguana who was merely startled by being bopped on the nose but nonetheless does show what these extremely sharp teeth are capable of inflicting.

In this case the result was a severed artery and 15 sutures!

I hasten to add not all Iguana bites are this bad but it does prove what an Iguana is capable of inflicting on its owner.

Iguana’s teeth are more visible in larger or adult Iguanas, sometimes they appear to be hidden and it seems they just have rows of gums, but as can clearly be seen in these pictures they do have rows of very sharp serrated teeth which they use to perforate leaves (almost like tearing a stamp off) when eating in the wild.

An Iguana can have somewhere from 60 to over 100 teeth. Unlike humans iguanas teeth are continually being replaced, also as the Iguana grows in size and the jaws lengthen then more teeth can grow behind the ones already in place.

The Iguana has teeth already in place behind the existing set ready to come through when the old ones are lost or shed, this is a continual process throughout the Iguanas life, and you may find old teeth on the floor of the Iguanas habitat when cleaning.

Much of the damage received in an Iguana bite is produced not solely by the Iguana alone, but additionally by the tendency of the person being bit, quickly recoiling or withdrawing that part of the anatomy attached to the Iguana, resulting in self inflicted tear’s to the flesh that would not originally have been half as bad.

The moral here being if you are the subject of a glazen eyed hormonally challenged male Iguana that has decided you are Miss Iguana 2002, and he has started to clamp his jaws in a vice like mating bite onto your arm or leg! then the worst thing you can do is pull away from it!

One method I used myself, was to place my fingers over the nostrils of the Iguana which then released his bite (I may just have been lucky here as they can hold their breath for a very long time), another is to pull down, not harshly but firmly on the dewlap until the mouth opens, also prizing the mouth open can work but is not recommended as care has to be taken here not to damage the jaw or teeth as mouth rot could set into a wound and can be difficult to eradicate!

One tip, if you are a victim of an Iguana bite that has drawn blood (and this has been the result of forum discussion on the subject), it is to place the injured part under ice cold water or alternatively placing the hand into ice, this helps stem the flow and allows treatment. Also seek medical advice as you might need sutures, antiseptic, antibiotic or tetanus treatment as well.

One final picture here, that further clearly illustrates a full set of Iguana teeth, and by counting half way around the jaw in this case, gives around 30 teeth! which would mean this fellow had around 120 in total! and although sadly no longer capable of using them, I can’t help feeling that handler still needs to keep his fingers clear of those teeth 🙂

Don’t let this put you off these marvellous creatures that can be the subject of many hours of fascination, but more for the new or inexperienced..are you sure you can handle Iguana keeping and are you certain of all the pitfalls, please read up on the care of Iguanas fully before attempting to acquire one and then if you are certain you can give one a good home and fully understand what you are letting yourself in for, then first of all, if at all possible try to ease the burden of rescue centres, and re-home a rescue.