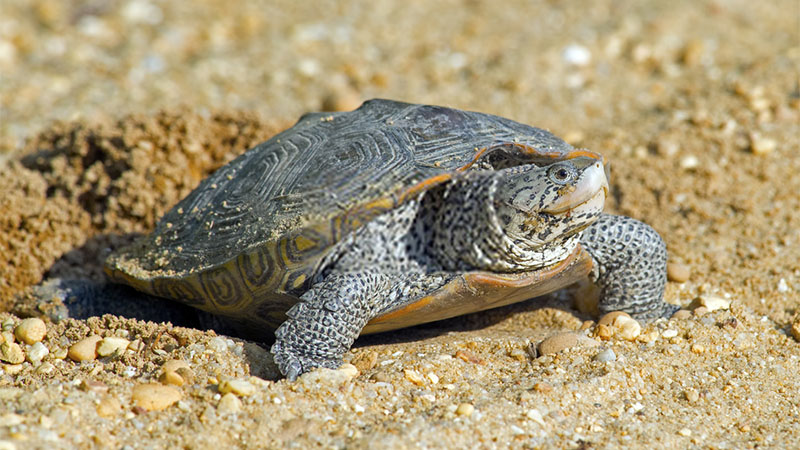 Diamondback Terrapin’s are found throughout North America along the Eastern Atlantic Coast & the Gulf Coast, as far South to Florida and the Florida Keys going up North to Cape Cod in Massachusetts, and then down to Texas. These guys, unlike other aquatics, prefer a Brackish Water environment, that is, water that is in between fresh and salt water (its salty, but not to the point as ocean water), though some diamondback’s have been seen swimming around along the Atlantic Coastal Waters.

Wild Diamondback’s feed on a variety of things including crustaceans such as crayfish and mollusks, fish, insects, and vegetation. In Captivity, a diet consisting of live foods such as a variety of insects, crickets, fish (minnows & guppies), worms, pellet foods (Mazuri, Reptomin, etc.), and vegetation such as aquatic plants. Feeding occasional crustacean’s such as shrimp and crayfish from time to time is also recommended. Wild Caught food isn’t recommended, but if so, we suggest freezing it as it helps in eliminating parasites.

As noted before, Diamondback’s are mainly found in brackish environments (water that is mid-way between salty and fresh). Though good swimmers, diamondback’s prefer slow-moving shallow waters within creeks, marshes, ponds, swamps, and mangroves.

Captivity habitats for diamondback’s should be made a little different then that of sliders, maps, painteds, etc. Seeing as diamondback’s are found only in salty water environments, the turtle’s habitat should mimic this type of water setting as much as possible. There are many debates about whether it really is necessary to do this, and it most likely is not as they can be kept in fresh water just fine, but my take on this is that seeing as these turtles are only found in a brackish environment, this type of setting should be established, for the better being of the animal.

The water should be less deep, with about 8″ of depth in water per every 4-5″ of turtle (length wise). Basking area should be provided, as always, with heat lamp & UVB ray light. Filtration and filter media also needs to be considered, like all turtles. I wouldn’t recommend keeping a carbon insert in your filter’s media, as it may remove any additional salt you may add to the water to produce your brackish settings.

To make Brackish Water: So, how does one go about on producing brackish water? Simple, by using aquarium salt, that is, marine salt sold in salt water aquarium stores or just about any fish pet store, can be added. The salinity level should be higher then fresh water, yet lower then regular ocean water.

Diamondback terrapins aren’t recommended as very first beginner turtles, and that’s basically due to the fact that they require a bit more of specific care then do other common aquatics, like the painted turtle. They do grow fairly large, with females ranging around 9″, depending on subspecies, and males smaller. However, if you seem to have a fondness to these beautiful turtles, like me, then I would suggest getting yourself a Diamondback. They are a rather friendly species of turtle (Northern Diamondback anyway), are different, and in my opinion, they are extremely beautiful.

Indoor Habitat: Diamondback’s grow rather large, thus needed a large aquarium if being kept indoors. My suggestion is minimum size for 1 adult female diamondback is a 75 gallon, and for 1 male is a 55 gallon. Add 20 gallons per extra turtle. Sizes of habitats can change depending on reality average size of YOUR subspecies of Diamondback.

Diet: Balanced diet consisting of protein foods and vegetation. See above for list.