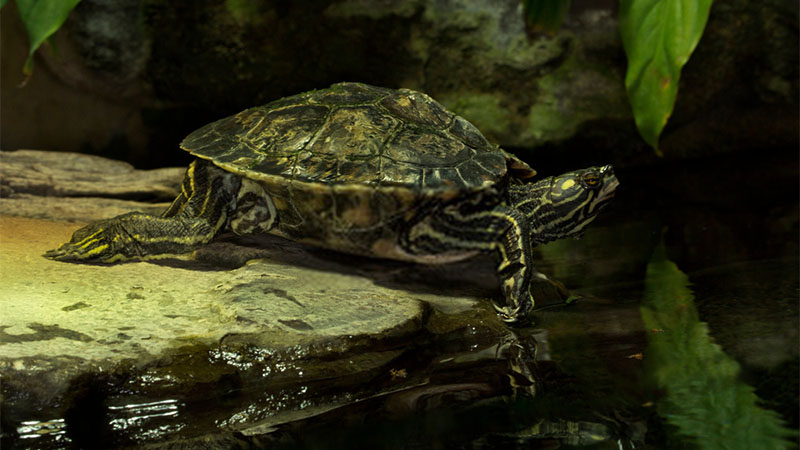 Map turtles, though they may look similar to sliders and painted turtles, are very unique turtles in many aspects. The first is in the shell and body patterns. Most Map Turtles feature some what of “spines” coming out of the edge in portions of the carapace earning some of them the nickname “Sawbacks”. Another characteristic is the general “map” looking patterns distributed all around the body and scutes. Some Map’s also feature large head and jaws (or beaks as one may put it).

Alright, in my honest opinion through research I have done and learned, most map turtles can be a beginners turtle, but require a bit more maintenance then some of the other common turtles.

The the diet can somewhat relate to sliders and so forth, it also does have its differences. A few protein based foods can be fed such as insects, feeder fish, crickets, wax worms, and so forth. However, vegetation is also preferred among them, especially as adults. Favourites include: romaine lettuce, aquatic plant matter, carrots can also be a plus, etc.

Map Turtles are found throughout river based habitats. They are also good basking turtles. Temperatures run the same like most of the other common turtles, with waters in the mid 70’s. A good natural looking habitat indoors is recommended to reduce stress, which may I say, is a feature on Map Turtles.

So far so good huh? Now for some of the down parts of this species. Some of the main things that don’t make these turtles an A++ beginner’s turtles are their sensitivity to water quality. Map turtles tend to be more sensitive to water quality then some of their similar partners. They are less tolerant to water conditions then sliders and other aquatics. When keeping Maps, its important to keep a Water Testing Kit with you at all times. pH levels must be watched as well as tap water hardness. Superb filtration systems must be present in the habitat as a little glitch in the water can cause ammonia levels to sky rocket, and this alone can be fatal to Maps, while on the other hand, RES and Painteds would be a bit more resistant to it.

Map turtles are very shy by nature and very nervous (skittish) turtles. They get stressed really easily and frightened as well. I’ve known some keepers have their map turtles for 2-3 years, yet the turtle still gets freaked out when the owner comes by the tank. If your looking for a well personality turtle for your family or kids, a Map Turtle may not be right for you (however, don’t get me started with the turtles and kids situation, turtles in general may not be right for a kid family period. Read our Turtles & Children Article for important aspects and information).

Where to keep a Map Turtle: Another important aspect is where one will keep your map turtles habitat. As mentioned before, these guys are shy stressful creatures. An indoor habitat is recommended. One where you can monitor your turtle safely and measure important conditions such as the water quality and temperatures. The habitat should be placed in a low-traffic zone to keep the turtle as calm and relaxed as possible. Furnish your tank as natural and wild as possible, which will help in getting your turtle to be calm and stress-free as well. Remember, a stressed out turtle can lead to a sick turtle.

Map Turtles grow in a variety of sizes. Some being very small, which can be a plus in space matters, and others getting at a decent large size. They have nice physical characteristics and are very beautiful looking turtles.

Over all though, Map turtles can be very good pet turtles, though may be a small challenge for beginners (but not by a long shot). As a very very first beginner turtle, I recommend Not going with a Map Turtle. Try a hardier species such as a slider or a Painted Turtle. If you wish to get a Map Turtle, then just just make sure what is expected for it to be kept healthy. Remember, this is just an overlook on the species itself, so the Map Turtle species specific may also have more requirements that you will need to make sure you know of.

Important Information: This is going in general, look for species specific.