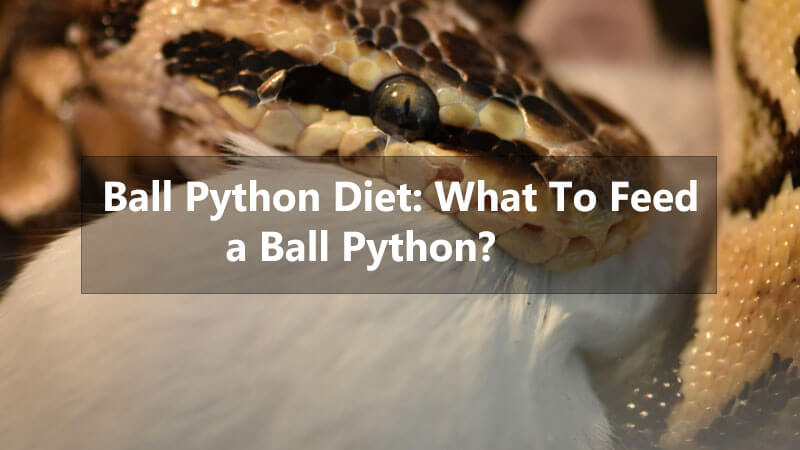 One of the most fascinating aspects of snake care is feeding. Many keepers enjoy this aspect of snake husbandry, but others, especially beginners, are frequently intimidated by the entire process. Don’t be worried! We’re here to walk you through every step of feeding your ball python.

So, here is everything you need to know about the ball python diet and how you feed them if they’re being picky with their food.

Table of Contents
1 What do Ball Pythons eat?
2 Live prey vs. pre-killed: Which is better?
3 How to know what Size Prey to Choose?
3.1 Feeder sizes:
4 How Often Should You Feed Your Ball Python?
5 Where to Get Python Food
6 Can you feed them multiple mice in one go?
7 How many days can a ball python go without eating?
8 Concerns you might have while feeding a Ball python
8.1 Stress:
8.2 Sickness:
8.3 Shedding:
9 How to encourage your ball python to eat.
10 How expensive can ball python food get?

What do Ball Pythons eat?

Ball pythons primarily consume rodents. They eat any small rodent they can catch and overpower in the wild. If they come across any small nesting birds, they will most likely eat them. Younger snakes normally consume big crickets, but they should be eating fuzzies or pinkies until they become adults.

Ball pythons in captivity can spend their entire lives feeding on mice or rats. They will, however, consume gerbils, multimammate mice, hamsters, and other small exotic mouse breeds. The vast majority, on the other hand, are content to eat domesticated rodents.

There are ball pythons that only eat mice, while others prefer rats. Some, on the other hand, will eat both. Many keepers swear they only feed rats, but this isn’t always the case. That may be your preference, but if it is not your snake’s, there is nothing you can do.

If you buy a snake from a breeder or a herp pet store, find out what and how it was fed. Many large breeders in the United States only feed live food. This can be a problem if you live in a country where feeding live animals is illegal, or if you only have access to frozen rodents. If your local pet store does not sell frozen rodents, there are a plethora of online retailers who do.

Live prey vs. pre-killed: Which is better?

Feeding pet snakes pre-killed prey is safer than feeding it a live prey. This is because your snake is kept in a confined space (for e.g its tank), if it is unable to quickly kill a live prey, the prey can inflict some nasty wounds on your ball python

Injuries can occur if your snake isn’t hungry enough to hunt the live prey right away, or if it tries to kill the prey but doesn’t have complete control over it or fails to strike it. The mouse or rat may bite back at your snake, injuring it during a strike, or, worse, if your snake shows no interest in the prey, the mouse or rat may become hungry or bored and begin chewing on your snake because neither of them has anywhere to flee.

Feeding pre-killed prey is a safer and more convenient alternative because it lets you buy frozen prey items and keep them in the freezer, making it easier to have the prey on hand whenever you need it.

Going to the pet store for food every time your snake gets hungry or raising your own prey can be more pricey and time-consuming than feeding pre-killed, and it doesn’t guarantee you’ll be able to get the right-sized prey when your snake is hungry. Some pet stores sell frozen prey or fresh-killed prey that you can freeze for later use.

How to know what Size Prey to Choose?

As a general rule, feeder prey should never be wider than the widest part of the snake’s midsection. To be honest, this is a pretty good indicator. It’s well worth starting from the beginning. Any feeding-related complications, such as regurgitation, will be greatly reduced as a result.

How Often Should You Feed Your Ball Python?

If a younger python is having trouble understanding how it should eat an already dead prey, it is possible to condition the snake to pre-killed prey by wiggling the prey near the snake to simulate movement before the snake strikes. The snake will become used to the already dead prey after a few eating it a few times.

Where to Get Python Food

Frozen rodents can be purchased in many different ways, including:

Most snake keepers prefer to buy their rodents in bulk because shipping costs are high (they must be shipped overnight because they are frozen) and buying one rat a week can be inconvenient. Save even more money by combining orders and splitting shipping costs with a friend.

Can you feed them multiple mice in one go?

Some people feed their Royals to multiple feeders in a row But it’s just something I’ve never done or had any reason to do.

Any Royals I’ve bred or kept have always been of a healthy weight when they were transferred to their permanent keepers or pet shops. It all comes down to proper feeder sizing for your snake.

For the most part, many people use the multi feeding’ option without any problem. However, with a newbie keeper, this “could” lead to serious weight problems. As well as any potential health complications.

Remember that, like many other snake species, Royals frequently show signs of hunger. As a result, you don’t need to overfeed to compensate for times when it isn’t eating.

While they do frequently wander around the setup in search of food, it is not as common as it would be with a Corn snake, for example.

How many days can a ball python go without eating?

Ball pythons can go for months without eating as juveniles. If an adult is in good health, he or she can go for several months. For peace of mind and to ensure that there are no problems, you should always have your snake vet checked after a month of not eating.

Older snakes can also go on a ‘hunger strike.’ This is a very common Royal issue for many people. It is well known that many reptiles will engage in self-weight-loss.’ So I don’t see why Royals who are known for it wouldn’t do it as well. However, this is just my opinion.

If there are no health issues, Royals can go for weeks without eating. This is more noticeable during the winter/colder months. So, once the Royal is over a couple of years old, the Royal’s body language is critical.

Leave the feed until you see them actively wanting and searching for prey, which is a good rule of thumb. Roaming around the setup in the early evening or after lights out is a dead giveaway. More so if they’ve been hidden away for a week or so and haven’t been seen in a while.

This can also be a once-a-month feeding schedule, which is pretty common. As long as that snake gets yearly or bi-yearly Herp Vet check-ups and weight loss is not a problem, everything should be fine.

Concerns you might have while feeding a Ball python

Ball pythons are extremely picky eaters. And, if your snake is new, keep in mind that snakes, particularly ball pythons, can be too stressed to eat in their new home environment for weeks or even months. Understanding why your ball python isn’t eating can help you figure out how to get your snake to eat again.

If you have a new ball python, it may be stressed by the changes. You can give it a few days to adjust before trying to feed it again.

Also, if you have recently traveled with your pet, the trip may have taken a toll on it, and it will need time to recover.

Has your ball python recently been handled excessively? Ball pythons are shy pets who, despite being harmless and cute, dislike being handled frequently. If this is the case, give it some space for a few days before feeding it.

First, your ball python may be refusing to eat because he is constipated. Generally, a constipated ball python will refuse to eat anything you offer him until his stomach has cleared of their previous meal.

If your ball python is about to enter or is already in a shed cycle, it will not eat until it has shed all of its old skin.

Examine your snake’s skin closely to see if it is entering a shed cycle. If they have milky eyes and an ashy complexion, this should explain why they aren’t eating. Read in detail on ball python shedding.

How to encourage your ball python to eat.

If your ball python is refusing to eat, you can try the following:

If your ball python still refuses to eat, even though you tried all of the above, make an appointment with a veterinarian. Your veterinarian can perform a thorough examination of your snake to determine if it has parasites or another health issue. They can also prescribe a treatment to assist in resolving the problem.

How expensive can ball python food get?

Based on the assumption that your python will live for 30 years (the average) and will eat large-sized rats for the majority of that time, it is reasonable to offer $10,000-11,000 as the total lifetime cost of feeding a ball python. If mice are used, the cost is closer to $4,000, since they cost four times less than rats.

This should hopefully help you with any ball python feeding issues. If not, the breeder or person who sold you the snake should always be your first point of contact. Caring for snakes can be pretty difficult and it will take time to figure out what works best for you.

Weather you’re feeding your ball python live prey or pre-killed you should always keep in mind the points that we discussed above. Doesn’t matter if you think of your ball pythons as a pet or a family member all of them deserve our best possible care & attention.