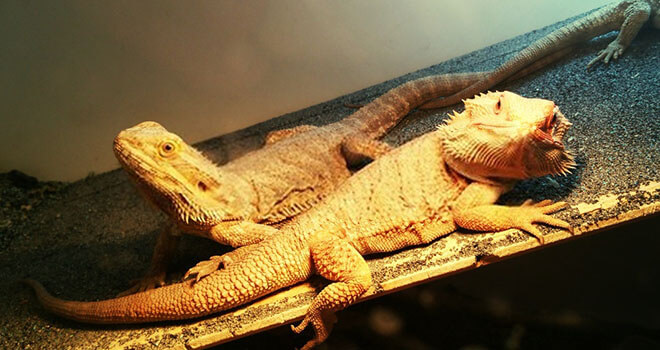 There are many different types of bearded dragons that are native to Australia. Eight different species of these reptiles have already been discovered, but only a few of these are commonly kept as pets. Bearded dragons are of the genus Pogona, the subfamily Agamidae, and class Reptilia. It is believed that there are still many undiscovered species of Pogona roaming Australia’s outback today.

Agamid (meaning “true lizard”), also known as “Dragon Lizards”, are a family of reptiles in the order Squamata. This family of lizards includes more than 300 species that are distributed throughout Asia, Australia and Africa. Although, there have been reports of some species roaming as far as southern Europe.

The agamid clades are concentrated around the arid regions of Western, Northern, Central, and less common in the wet forest areas to the East of Australia. When Australia was formed from the ruins of the ancient super-continent Gondwana, it drifted north and became very dry, causing the diverse regions the agamid are found. It is during this period that Agamidae in Australia began to diversify and become more common in the fossil record. The bearded dragon was one of these lizards!

The Bearded Dragon are a genus of lizards, Pogona (formerly Amphibolurus). There are eight species of Pogona found within Australia, two of which are commonly classified as sub-species. Here is their specific placement within the animal kingdom:

Below are the proper names for each species, followed by the scientists credited with the find, and the year they were discovered.

Also known as the Yellow-Headed Dragon, this is the most common type of beardie found in pet stores and amongst breeders today. These dragons are native to Central Australia, although they are found in nearly every state. Colors of this type vary, ranging from brown and grey to red, oranges, whites and yellows.

The Inland dragons are the largest among all the species and an adult can grow to around 2 feet in length. An even larger version of this species is being bred in Germany, earning them the moniker German Giants.

This attractive specie is sometimes referred to as the Lawson’s bearded dragon, in honor of the famous Australian author/poet Henry Lawson. It has also been called Black Soil bearded dragon and P. brevis.

These dragons are the second most popular species of bearded dragon to be kept as pets. Most of them are native to Queensland, and some can be found in the Northern Territory. They have a khaki/sand-like color and have virtually no beard. As captive breeding success rates increase, so does the popularity of this specific dragon the pet trade.

The eastern bearded dragon is most common in the wooded parts of Eastern Australia, south of the Cape York Peninsula. Barbata (Latin for bearded), was the first specie of bearded dragon discovered. They resemble a smaller central bearded dragon, and are generally more aggressive.

Eastern dragons have a dark grey-black color and are sometimes yellowish-brown, reddish-brown, or dark brown. Baby eastern dragons are paler in color than the adults and have patterns that fade as they mature. As they mature, a subtle pale yellow, blue, or green tinge on the forepart of its head will develop. The adult males have a dark grey to black “beard” at all times.

Northwest bearded dragons are smallest of all the dragons, even the dwarf bearded dragons. They grow only around 5.5 inches(14 cm) in length. Mitchelli’s have large cone like head spikes which makes them distinct from other bearded dragons. Pogona mitchelli are found near the interior of the northern parts of western Australia.

This specie is often found within the small coastal region (Drysdale river) of Kimberley in northwest Australia, earning it yet another nickname, the Kimberley bearded dragon. Drysdale bearded dragons have less noticeable scales and spikes than other species, and their diet consists of nearly 85% insect matter. The Kimberly dragon is so rare that enthusiasts travel annually to the Drysdale river area in hopes of catching a peek at this specimen scurrying across the road, or basking upon a branch.

The Nullabor bearded dragon is another rare species also known as the Banded Bearded Dragon. It has large white bands across the back and tail. Nullabor’s are found around the flat, arid, sparse shrub lands of South Australia. Banded beardies are very difficult to breed in captivity and thus, are not found within the pet trade.

Western bearded dragons are found near the Southwest coast of Australia, central deserts and coastal dunes. They have a chameleon-like color which can blend to the environment, and has a brighter display of interacting with other dragons. The western beardie grows to a mere 15 inches, making it a bit smaller than its cousins, but still not deserving of the name P. minima.

Living in the arid woodland regions of Australia, the Pogona Vittikins is a climber, and is the most commonly seen pogona as both a pet and in the wild. This lizard is approximately 24 inches long, with its tail accounting for more than half of its body. They have bigger heads and beards, and will live up to 10 years. Pogona Vittikins are normally brown in color. However, breeding has created a variety of color options.

This specie is very similar to Pogona mitchelli and are found in a wide variety of habitats including forests and desert. The Dwarf Bearded Dragon lives all over western and central Australia, and is one of the smaller Pogona species, reaching about 6″ from snout to vent as an adult. The dwarf dragon is easy to set apart from other species because of its short limbs.

It is believed that different species of Pogona do not interact with one another while in the wild, but it has been reported in parts of inland Eastern Australia, that both P. barbata and P. vitticeps occur within relatively close proximity. Within these areas however, each species seems to stay within their particular habitat without any overlap. This is just one of many areas of the bearded dragons natural characteristics that is in need of further research and understanding.

Out of the eight species, the P. Vitticeps is the most popularly kept as pets, with the P. henrylawsoni and P. barbata also being commercially bred in much smaller numbers . You may also come across a hybrid beardie known as a Vittikin Dragon. This is a hybrid of an Inland beardie and a Lawson’s, a practice that seems to be increasing in popularity.

Australia’s strict collecting and exporting laws, along with difficulty in captive breeding, has kept the remaining species from becoming readily available for purchase. Unfortunately, these restrictions also put a damper on the research into understanding more about these fascinating lizards. Scientists are prevented from collecting species for study, or from publishing any of their findings due to fear of repercussions.

No dragons have been legally exported for the last several years, meaning the majority of beardies found today are captive bred. This population is mostly credited to exportation of the German stock, and the rest are most likely descendents from those illegally smuggled years prior.

While captive breeding helps to increase overall health and minimizes birth defects, parasites and population issues, the gene pool is becoming increasingly smaller. Inbreeding is leading to a decrease in the full size and genetic health of these creatures. Without new blood lines coming in from Australia, the gene pool and overall health of the captive species will diminish.