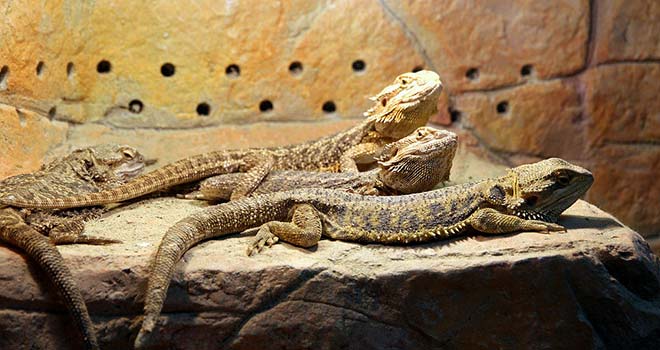 Breeding Bearded Dragons seems a bit daunting at first, but in fact it’s a little too easy! These reptiles are prolific breeders, I have a female Beardie who has layed over 120 eggs over the course of 3 months.

For this reason alone you should know whether you have a male or a female Bearded Dragon, especially if you plan to keep them in groups.

Whether from the same clutch or not, males will breed with females regardless. You also will find like most animals that you can not keep two males together due to territorial disputes but you can keep females together quite happily.

It is quite difficult to accurately sex a young Bearded Dragon under 3 months old but it can be done. You can tell an adult male from a female from the shape of the head, the male will have a larger more rounded head with a larger beard looking quite bullish, whereas the female will have a much thinner and narrow head.

In juveniles it is much harder to recognize this, so we have to look at the rear legs. Males will have a line of dark dots called femoral pores that will be much more pronounced than the female, it is hard to miss them on a male dragon.

Also, you can check for hemipenal bulging which will be absent in the female to determine their sex. To do this, simply hold the dragon and lift the tail up over their back looking at the vent/ cloacal opening between their legs, you should see two bulges on either side of the base of the tail after the vent with an indentation in the center of the tail between the hemipenes.

How to Breed Bearded Dragons

You don’t really need to do anything special other than keeping a male and female dragon together in an enclosure with adequate space, they will go through various courtship displays and some fighting, often circling each other and the male will bite the back of the head of the female to immobilize her in order to mount.

Books do mention creating rest periods and altering the heat to simulate seasonal behaviour to encourage breeding but I’ve never needed to do this. Females will generally always develop eggs providing they are happy.

How to Help Bearded Dragons Lay their Eggs

I recommend a damp bearded dragon substrate made from equal parts vermiculite, play sand, and topsoil. By adding a large piece of bark over the top, it’ll mean you can be a bit shallower with the amount of soil, although the whole vivarium will need to be at least 4 inches deep with larger mounds up to 10 inches deep.

The female Bearded Dragon will dig in various spots and this can go on for days until she finally digs a good burrow, just make sure the substrate is damp so that it doesn’t collapse.

Pogona can lay up to 25 eggs in a single clutch and can lay up to 6 clutches over the course of several months – my female dragon took about 3 months and every 2 or 3 weeks would lay another clutch until she finally started laying infertile eggs.

During this time it’s important to ensure that plenty of food is provided dusted in calcium, if there is a lack of calcium then the eggs will be formed by taking calcium away from the dragon’s bones. You can read more details on bearded dragon eggs.

How to Incubate Bearded Dragon Eggs

I’ve tried many methods of incubating Bearded Dragon eggs and the method I find that works the best is to get a plastic box and lid with a few small air holes in it, fill it about 3 cms/ 1 inch deep with vermiculite, and add water until it’s all damp.

Add the eggs and leave this in the airing cupboard, checking regularly to see if the eggs are drying out, if they are just add in more water to the substrate. If the eggs look like they’re collapsing, don’t worry as the egg can still be a healthy one, just add a little more water and it should begin growing again.

Healthy fertile eggs will remain white. I tried water baths, heat mats, leaving them in the viv etc… and the cheapest and most successful way without losing any eggs or spending cash on an incubator is to just leave them in the airing cupboard.

If you want to buy a ready-made incubator, we recommend ZooMed Reptibator.

How to Hatch Bearded Dragon Eggs

After a period of around 8 weeks, the eggs will begin to hatch, it will take a long time for them to hatch, make sure to keep the egg damp or if it becomes too dry with the baby dragon still in there then the eggs sack will stick and prove difficult for the Beardie to get out of.

You can trim the egg back to help if you’re very careful, but generally, just keep them damp and leave them to it.

Normally when they begin to hatch I also remove them from the vermiculite and leave them on paper towel under a warm lamp, also making sure to keep them fairly separated. I just find this easier as I’ve had these tiny dragons digging and hiding in the substrate making it very difficult to find them.

How to look after baby Bearded Dragons

To start with the vivarium temperature should match the incubator temperature for the first few days and then it can be left to the default. For a substrate use a paper towel, avoid using sand or anything similar, you’ll end up changing the towel every other day with the amount of mess the babies make. This also avoids the risk of impaction.

Avoid handling the babies until at least a few weeks old, ideally, leave them until around 8 weeks before handling. Make sure to provide plenty of hiding places and backing spots, but when cleaning them out take care in removing the decoration and replacing it.

Feeding should occur multiple times daily and ensure that there is regular supplement dusting and a mixture of small insects, no longer than the width of the babies head, and finely shredded vegetation.

The rest of it is the same as looking after adult Bearded Dragons, the same rules for habitat and lighting apply. I have read about keeping them in a small area to ensure they find their food, but I’ve yet to see a baby dragon have difficulty in locating food in a large 4 ft vivarium.

2 thoughts on “Breeding Bearded Dragons | How to Breed Beardies”