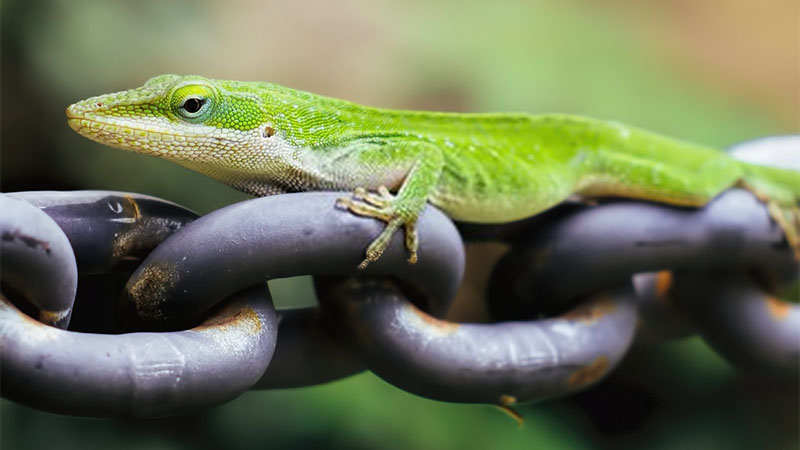 One of the easiest pet lizards for beginners to take care of is the Anole Lizard. They live in the tropics and subtropics and can be found across the southern United States. They are approximately 6-8 inches in length, including the tail. They are climbing lizards with toes that stick like they have adhesive on them. The Anole Lizard comes in shades of green and brown, and both males and females have a pink dewlap under the neck.

The Anole Lizard is perfect as a pet because they are very small and don’t require much in the way of equipment. A 20-gallon aquarium is large enough to hold one. They like to climb so a high cage is preferred as compared to a wide one.

They like to climb trees and bask in the sun so it‘s a good idea to put some perches and rocks in their home.

The best substrate for the Anole Lizard to have in his enclosure is reptile carpet.

They also require high humidity and high temperatures between 80 and 85 degrees.

A hygrometer to measure the humidity level in the anole cage.

Their basking spot should be ten degrees higher in temperature than that. At night, temperatures should drop down to around 60 degrees.

In addition, you will need a UV light that should be on for 12 hours and off for 12 hours.

You give them water by spraying the tank with a mist, as they drink the droplets off the trees and tank and not out of a bowl like other lizards.

The Anole Lizard eats all kinds of insects, but crickets are the ones they are most often fed in captivity. Out in the wild they also eat spiders, cockroaches, moths and grubs.

If you are an Anole Lizard in captivity as a pet, you will need to feed him vitamins on top of his food two to three times a week.