Do Chameleons Lay Eggs or Give Live Birth 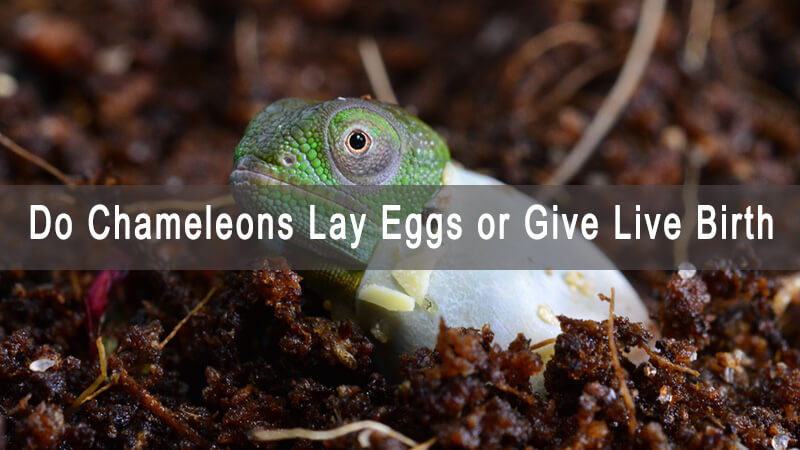 Keeping a Chameleon as your pet is a tricky business, and especially when you’re trying to breed them. Like their peculiar nature, these color-changing creatures are different in terms of breeding. The question arises, whether Chameleons lay eggs or give live birth?

The answer differs for different species of Chameleons; some species lay eggs, and others give live birth. These two can be categorized as oviparous and ovoviviparous; those species that lay eggs directly to the ground are oviparous. Others lay eggs inside their bodies that later hatch inside them and consequently take live birth.

This is the most common type of Chameleons that lay eggs directly to the ground. A female Chameleon belonging to this species lays eggs ranging from 20-200 after mating. The time period between laying eggs and mating is three to six weeks but can differ depending on different species.

The Panther Chameleon female stops eating for 10-15 days after mating, which is an indication that she is preparing to lay eggs. In that case, the female will try digging holes or a tunnel in the ground to lay her eggs inside. In the case of captivity, it’s suggested to provide a laying bin to provide her space to lay eggs.

An oviparous female can lay multiple broods within a year and lay unfertilized eggs if it has not matted with a male.

Chameleons are unique in the world of reptiles; like other reptiles, most Chameleon species lay eggs. However, few like Jackson’s Chameleon give live birth to their babies. This type of reproduction in Chameleons is named Ovoviviparous, which means that the female will lay eggs inside her body, where the eggs do not have any shell.

In this type of reproduction, the embryo develops inside the female body and gets required nutrients by being attached to the yolk inside the body of the carrier female. The gestation time ranges from four to six months, after which the female gives birth to the baby. At the time of birth, the babies are covered with a very thick and sticky membrane, which the mother sticks to a branch; later, the baby emerges out of it.

Like other mammals and birds, the Chameleons have a cycle of development of eggs for fertilization within a specific time period. This time is very short, which leaves very little chance for it to be fertilized before the egg is fully developed inside the female Chameleon. However, if the eggs are completely formed, the female has an urge to lay them to begin the cycle again, which sometimes results in the laying of unfertilized eggs.

The breeding age of Chameleons might differ for different species, yet most of them reach the age of breeding after one year. Some species, such as a Veiled Chameleon, reach the age of breeding right after four months. However, for the safeguarding of your pet, it is suggested to wait for at least one year before you try to breed them, as younger Chameleons might die early due to difficulty in laying eggs.

How often do Chameleons lay eggs?

A female Chameleon who has reached the age of breeding will lay a clutch of eggs every six months. The frequency of lying eggs can be determined by various factors, including environmental conditions, the level of hydration of the female, and how hot or cold she is kept. During the rainy season or cold weather conditions, the female Chameleon most probably doesn’t lay eggs.

A warmer and dry season or weather would be ideal for a female Chameleon to lay eggs, in which the frequency of laying eggs is every three to four months. The season is ideal because it’s important for the baby Chameleons to be warm to develop inside the eggs.

Hydration and diet also play a key role in the female’s efficiency in laying eggs. A well-hydrated and well-fed Chameleon is expected to lay eggs more often than one which is not receiving the right amount of food and water.

It’s best to have the Chameleon lay eggs every five to six months, as the female carrying eggs inside her body carries a lot of stress, which is unhealthy and fatal for the internal organs of a Chameleon. Limiting the egg-laying seems a better option to prevent such happenings, which can be done by lowering the temperature and feeding the Chameleons less often.

How many eggs does Chameleon lay at one time?

Depending on different species, the number of eggs laid at one time might differ. However, a rough estimate of the eggs laid by Chameleons can be as many as 200 eggs. The type of Chameleon Species determines how many eggs could be expected from a certain Chameleon.

After the species, the size of Chameleon determines the number of eggs by a female Chameleon. Some large species can lay eggs from 80 to 100 at one time, where on the other hand, the small Chameleons may lay 2 to 4 eggs at one time. For Ovoviviparous Chameleons, the number of live births can be 8 to 30 young at a time.

At what age do Chameleons start laying eggs?

How to tell if the Chameleon is ready to lay eggs?

There are different signs, which indicate that a female Chameleon is ready to lay eggs. It is crucial to keep an eye on these signs and events to provide the right conditions for her to lay eggs comfortably.

If a female Chameleon is ready to lay eggs, it spends more time on the floor than on the bush, that’s because she’s searching for a place to lay her eggs. Once found, she’ll start digging up the place to build a tunnel in which she can comfortably lay her eggs. If she doesn’t find a suitable place, she’ll continue looking for it, as it’s very unlikely of a female Chameleon to lay eggs in an uncomfortable place.

When close to laying eggs, the female Chameleon often stops eating for a few days. So, if you see a female Chameleon has lost her appetite, it’s a clear indication that she is about to lay eggs.

Where does the Chameleon lay her eggs?

Being a shy and solitary reptile, the patterns of its laying eggs is also similar to it. A female Chameleon in a while chooses to lay her eggs in a secluded area, a place where she can keep safe from the predators. It could be any place under the leaves, hanging plants, or fallen trees. The place needs to be moist, making it easier for the female to dig a tunnel.

However, in captivity, the female cannot do it on her own, so you must ensure these parameters are met. Placing a large container below the chameleon cage, filled with moist soil, will recreate the perfect environment for her to lay eggs. Finally, planting some plants in or around her cage would create a perfect imitation of the natural environment for her.

How long does it take for the Chameleon to lay eggs?

The time taken by Chameleon to lay eggs depends again on different factors. The level of comfort and privacy greatly impacts the time required to lay eggs. If the Chameleon is not comfortable and shy to lay eggs in open areas, it will retain the eggs inside her body until she finds a suitable spot.

Some Chameleons take longer than others to find suitable soil, dig tunnels which is completely normal behavior. Once a hole is dug in the ground and complete, the Chameleon will go inside and complete the egg-laying process in one or two hours.

Caring for a Chameleon during birthing:

As the Chameleon or any other reptile bears eggs, it requires extra care, as, during this time, the immune system of the Chameleon gets weak, making her more prone to diseases. As soon as you notice your Chameleon is carrying eggs, it’s crucial that you find a safe place for her and feeding and hydrating regularly.

Keep dusting the Chameleon with the dust of Vitamins and Calciums as she might not be getting enough of these supplements because of losing her appetite.

What to do after a Chameleon lays eggs?

The egg-laying process is very tiring for the Chameleon, as a massive amount of work is required by the Chameleon to find suitable places, dig holes in the mud and lay eggs; this might weaken your Chameleon. In this case, once the Chameleon has laid eggs, do give it some time to rest and provide plenty of food and water.

It is suggested to use lukewarm spray for the misting systems, which would help remove dirt off her body and provide her with plenty of water to drink later. Furthermore, provide a large amount of calcium and vitamins to recover deficiencies, if any.

What is Chameleon Egg binding:

It is a rare and serious condition in which a Chameleon tends to keep the eggs inside her body due to different factors, which may include poor environment, not being able to spot a suitable place to lay eggs, poor husbandry conditions, or even if she is unable to lay all of the eggs inside her body after laying a clutch of them. In this case, there’s a grave danger to the female Chameleon and must be treated at the earliest.

Egg binding can be detected by different symptoms shown by the female Chameleon, such as sunken eyes, open mouth breathing, and loss of appetite. These signs can indicate other problems, such as dehydration, yet you can trace the signs of egg binding by checking the stomach of your Chameleon.

In case of egg binding, have your Chameleon checked by a vet, who can treat this by injecting oxytocin into the Chameleon’s body to induce egg-laying. Otherwise, surgery is another option if the injection of Oxytocin doesn’t work.

The Chameleons reproduce differently based on their species, divided into two groups Oviparous-Egg laying and Ovoviviparus- live birth-giving Chameleons. Unusual symptoms and signs would inform you whether your Chameleon is ready to lay eggs and must be provided with special care and food to avoid inconvenience later.