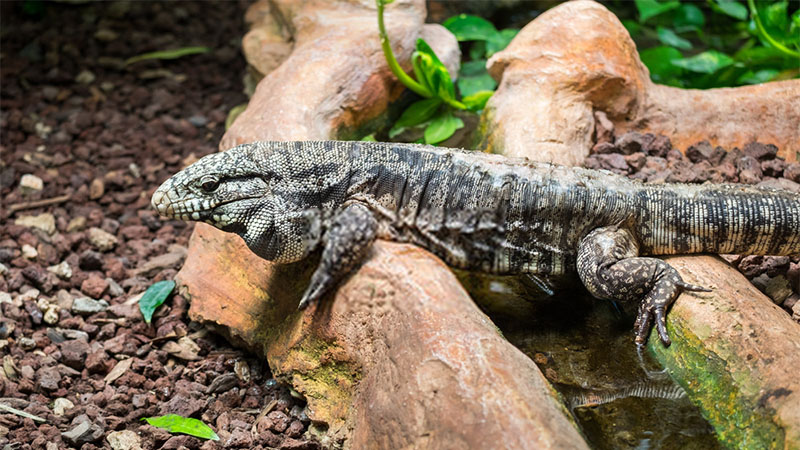 In this post, we will discuss how to take care of your Argentine tegu the right way. I will start out by saying that there is a lot of controversy on tegu care. There is not a single place online that I found that has settled on a basking temperature, enclosure size or anything for the tegu. What I say here and recommend are all my own learnings and personal experiences with tegus.

Argentine black and white tegu as their name suggests originate from Argentina, South America. They are terrestrial species that build dens and burrows on the edge of rain forests and savannas in South America. Hatchling tegus are green and black in color. The green coloration will turn to white throughout their first year of life.

Tegus grow extremely quickly and reach sexual maturity at about three years of age. There is some sexual dimorphism between male and female tegus. As they age male tegus will get thicker and longer and will reach to about four and a half feet. Female tegus will stay slimmer and will grow to a max of 3 feet.

In captivity, tegus can live 15 years or more so it really is a long commitment and a large financial commitment as well. You should really do your research on tegus before considering buying one.

Keeping tegus together is not recommended for first time tegu owners. It is easier to cohabiting tegus if you raise the tegu together. Female groups tend to get along better than male groups and it is not recommended keeping more than three tegus in a group. And obviously, if you have more than one tegu, they’re going to need a much larger enclosure size.

Hatchling should be kept in a 40-gallon aquarium or something similar with a screen lid for ventilation. The 40 gallons will last them around six months before you will need to upgrade.

We recommend building the finale enclosure in its first year because they grow very quickly.

Also if you’re cohabiting your tegus together you should always keep a very close eye on them and have another enclosure standing by ready for them to separate if anything were to go wrong.

For tegus, you will need a lot of substrates to burrow in. You need at least enough substrate for the tegu to completely bury itself. I personally use cypress mulch. Other good choices for the substrate are orchid bark eucalyptus mulch repti bark and coconut husk. You can also use aspen shavings or eco earth but I find that they don’t hold the tegus burrows very well and aspen shavings tend to not hold humidity as well as for the other substrate that I mentioned.

It is also important if you are using cypress mulch to get pure cypress mulch as opposed to a blend. You should definitely stay away from pine and cedar because the oils in those substrates are toxic to reptiles.

Tegus are tropical species that require warm temperatures. Their ambient temperature should be between 80 and 90 degrees and the hot spot should be between 95 and 110 degrees. They do require a full spectrum UVB light in order to digest their food. I personally use the 150 what powers bulb. We recommend having a timer set to come on for four hours in the morning then off for four hours then four hours again which would mimic their daytime activity in the wild. But obviously, if you can’t do that it’s okay to just have a normal day and night cycle for them.

Tegu do bromate or hibernate. During the brumation period, their temperature should be between 55 to 65 degrees and no lower than that. You will need to keep the lights off while they’re hibernating. Every so often you can turn the lights on and give them the opportunity to come up and bask because that’s what they would do in the wild. While tegus are hibernating you can mist their substrate once every couple of weeks just to keep it damp enough.

During the brumation period, It’s important that you don’t feed your tegu for two weeks before they go down for brumation. During this time their metabolisms are slower and they don’t digest food so all the food they just ate sits inside their stomach and rots which can kill them.

Hibernation periods can last for six months or longer. I’ve heard of tegu who’s going down for nine months out of the year. Tegu do not grow during the hibernation period.

You also don’t want to bother your tegu very much during the brumation period because they will be extremely grumpy.

When your tegu is waking up from hibernation you can offer them food several days after you notice them coming up consistently.

Tegus are notorious for having shedding problems if they have too low humidity. That’s why it is really important that you keep their humidity levels correct.

Just like with any other creature tegus should be provided with fresh water. The water dish should be big enough for their entire body to go inside of it to soak. Sometimes they do tend to pop inside their water dishes or when they’re being soaked so make sure you keep a close eye on their water container so it doesn’t get spoiled.

For feeding your tegus you can feed them anywhere. They’re typically too smart to get really territorial over enclosure feeding but it is recommended that you don’t hand feed them because they can be pretty ferocious eaters and while they don’t mean to they might accidentally grab your hand in excitement for food. Also, be careful if you’re feeding inside of your enclosure that your tegu does not consume any of the substrates.

Good foods for tegus include ground Turkey, fish cut into bite-sized chunks, eggs with the shell, blueberries, strawberries, grapes, tomatoes, melons and insects all cut down into bite-sized pieces. You should dust all their food with calcium powder with D3.

For hatchlings, they should be fed every day. They can be fed insects that are no larger than the space between their eyes which is small dubia roaches, half to three quarter inch crickets, mealworms and super worms with the heads cut off, ground meat and fish chunks.

Tegu will be more carnivorous as they’re young and then grow up into being more omnivorous as they’re older. When you’re feeding hatchlings, it’s recommended that you add a multivitamin once a week in addition to dusting their meals with calcium every day.

Juvenile tegu you should be fed every other day. They can eat super worms with the heads cut off, large crickets and large dubia roaches. You can start incorporating frozen-thawed, whole prey like pinky mice and fuzzy mice but they should not be fed often and not more than once or twice a week. They also eat ground meat, fish and eggs.

Sub-adults or tegus between one to three years old should be fed every two to three days. They can eat a properly sized frozen thawed, whole prey and large insects like adult dubia roaches, extra-large crickets, and super worms.

Adult tegu which are three or more years of age can be fed medium to large mice, small to medium rats. Anything larger shouldn’t be fed because they have a harder time swallowing it. Frozen thawed checks, ground meat, fish, eggs and a variety of fruits. Adult tegus are omnivores and love to eat and this could also lead to obesity so make sure that you’re taking is not getting too chunky when you’re feeding them.

Tegus will typically eat anything that you give them but in the wild they do typically feed on invertebrates and small fruit that’s fallen on the ground. It’s important to remember to feed your tegu healthy foods.