How to Train Your Pet Iguana (Training Iguana) 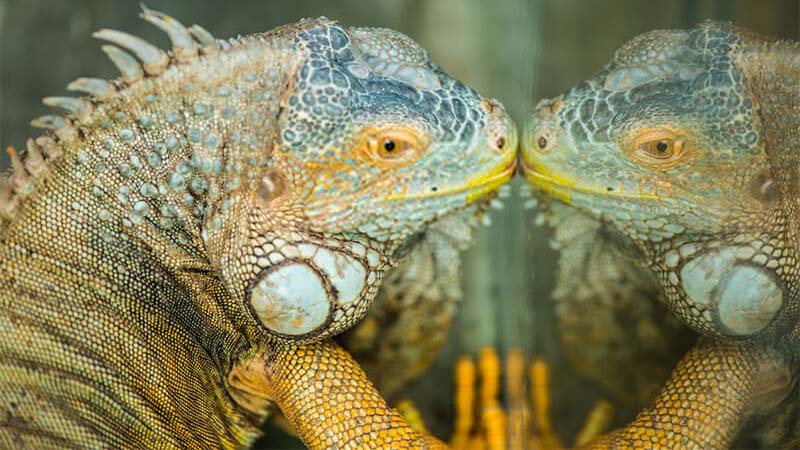 I adopted Babe from a reptile lover, was quite knowledgeable about proper care. He fed him properly, supplementing his diet with calcium and gave him the necessary lighting and climate control. His enclosure was a large converted dining hutch with all the essential items, but the expense of food and the upkeep of his large enclosure, proved to be too much for him, as he grew from a 6 oz baby to an 8 lb adult in 3 years. I welcomed his companionship into my lonely existence.

My life with babe began with an open mind that did not limit his intelligence like many herpetologists that I have since encountered. I saw how Henry the Lizard Lover interacted and trained his iguanas and my mind was an open parachute. I potty trained him and found if I showed him anything 3 times, he would learn. I gave him love and respect and a promise to make his life the best he could have.

I did not believe in cages, he was big enough to keep track of, or so I thought. I used a device that was for keys, you clapped and it would beep, it worked well until it would fall off but with time he began to claim the yard as his territory and he became quite trustworthy, though he did wander to neighbor’s yard at first, I scolded him with strong words and tone of voice.

I provided Babe with as much freedom as I could and it was a constant learning experience to figure out how to keep him healthy and happy. He would climb the olive trees and I would coax him down with a large pole, shaking the tree and touching his tail, till he made it to the edge of the tree and ride the branch down to a lower branch till he reached his ladder down. He spent most of his days in the tree until he was about 11, then he started to become more of a ground dweller. I placed a branch outside my window, covered it with a net so he could grip it better and he would come and go, in and out of the house as he wanted. There was a large lounge pad that overlooked the yard and a ladder that led down to Babeland. A wonderful garden with a fountain surrounded by rock and flowers and organic greens. It as his territory and he loved it.

Out and aboutHe knew how to come into the house, by window, sliding patio door, or front door. I would find him at the window, trying to slide the glass with his nose. He knew it opened, and he knew sometimes if he just kept trying it would open (what he didn’t realize is that I was the one sliding it open for him!)

I am not a fan of a permanent glass or screen home with lights and plastic plants, but if large enough and comfy enough, it can be a temporary shelter for times when they are young and you are not home. Any type of environment should be as natural as it can be, freedom should be given to them to explore and play and since iguanas think slowly, 5 minutes to them is like 15 minutes to us, so they need time to play. Freedom does come with a cost. Iguanas like to eat things they shouldn’t, explore places they shouldn’t go, and they can get into trouble when left alone. Caution needs to be taken with freedom. They are like children who need to have a safe environment, free of items that can be eaten, something as common as a pulled staple can kill an iguana; metal objects such as magnets and such can do the same.

Babe has broken toes, eaten rocks and rubber bands and taken some serious falls. Accidents are the cost of freedom, we need to keep in mind things that can happen and do our best to make their “area” free of foreign items and things they can catch toes in.

With that said, I do have an indoor room for Babe for the wintertime, it includes timed lights, heated blanket, artificial plants for shade from the south-facing window, all onto of a queen-sized bed, with ramps to crawl up and down on. He still gets rides in the car, but breathing cold air outdoors can result in a sinus infection, keep the outdoors minimum in winter months.