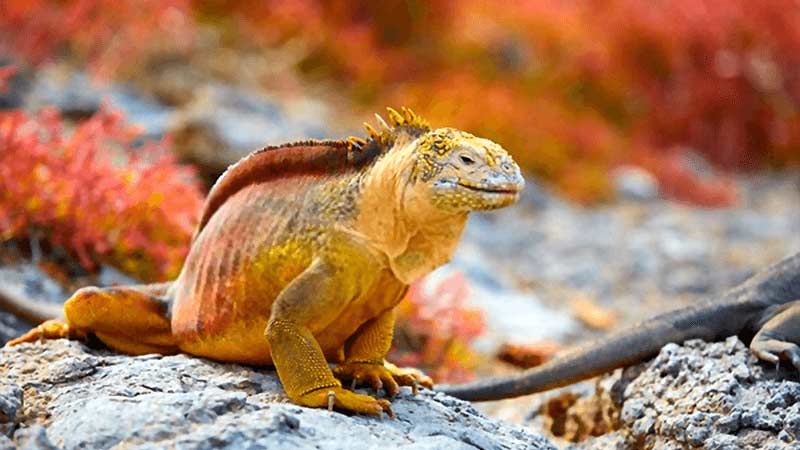 The Galapagos Islands consist of a 19 island archipaleago in the Pacific Ocean off the west coast of South America.  They are home to a variety of wildlife, including land and marine iguanas.  The islands are most renowned for their tortoises; however, they are the home of many other forms of wildlife.  The Spanish word Galápago in Spanish actually translates to the word tortoise.  Other animals inhabiting these islands include green turtles, frigatebirds, tropical penguins, albatrosses, mockingbirds, finches, and sea lions.

The marine iguana is only found on these islands and is the only iguana species whose food source is the sea, living almost solely on marine algae.  These creatures live primarily on the rocky island shores and beaches.  The animals are cold blooded, so they cannot stay in the water for long periods of time.  They tend to occupy the shallower waters closer to shore for their feeding, returning afterwards to bask in the warm tropical sun.  Marine iguanas are known to be aggressive when cold; this is because they are somewhat lethargic when they are cold and they feel vulnerable and threatened in this condition.

Marine iguanas are most vulnerable to wild animals originally introduced to the islands by humans, such as cats, dogs, goats and pigs.  Over the years, they have not evolved the necessary skills to fight these animals.  While these iguanas may seem clumsy on land, they are actually proficient and powerful swimmers at sea.  These Galapagos marine iguanas are a protected species by the government of Ecuador.

Land iguanas feed mainly on Prickly Pear Cacti and the Portulaca flower.  These iguanas are also vulnerable to the same predators as the marine iguana.  Cats and dogs are known to destroy entire nests of eggs in addition to launching physical attacks on the iguanas.  In years past, there have been several efforts made to remove these predators from the islands by protective organizations.

Many people do not realize that some cultures consider the iguana a food source.  They are reported to taste somewhat like chicken.  I cannot vouch for that because I have never eaten an iguana.  I have, however, eaten alligator before and it was tasty.  As an iguana lover and enthusiast, I personally do not wish to eat them.